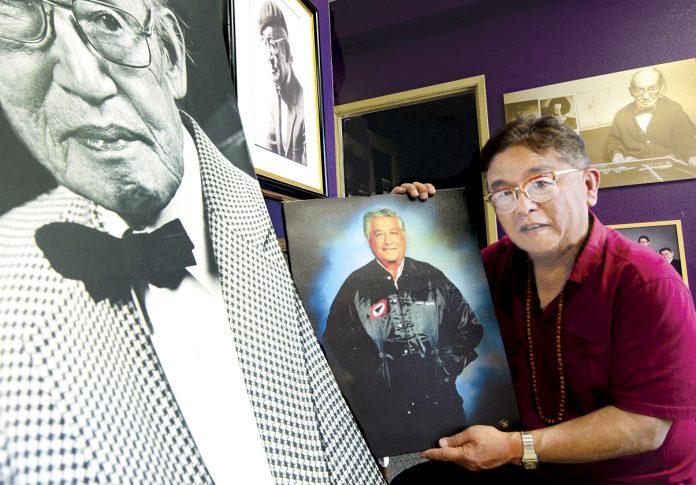 Gardena studio photographer Gary Miyatake has spent his entire professional career as bit of a maverick in the photo business. From being fired from his family’s photography studio 30 years ago to maintaining his own highly successful photo studio thanks to his ability to capture the pictures that eludes other photographers, Miyatake’s independent streak has served him well for many years.

Gardena studio photographer Gary Miyatake has spent his entire professional career as bit of a maverick in the photo business. From being fired from his family’s photography studio 30 years ago to maintaining his own highly successful photo studio thanks to his ability to capture the pictures that eludes other photographers, Miyatake’s independent streak has served him well for many years.

It was his fiercely independent nature and less-than-traditional approach to photography that helped him snap a one-of-a-kind photo of famed labor leader Cesar Chavez more than two decades ago that will live on forever in the Smithsonian Institution in Washington, D.C.

On March 27, at the Japanese American National Museum in the Little Tokyo area of downtown Los Angeles, Miyatake will be on hand at a special ceremony to acknowledge the donation of his Chavez portrait to the Smithsonian Institution.

The ceremony occurs only days before Chavez’s birthday on March 31; he would have been 88 this year.

In attendance will be Congresswoman Maxine Waters, Smithsonian Institution Curator Margie Salazar-Porzio, as well as members of the Chavez family.

“Just as Gary’s grandfather, Toyo Miyatake, had the foresight to slip a camera into Manzanar Internment Camp during World War II, and document that chapter of American History, Gary had the foresight in 1993 to take a formal portrait of Cesar Chavez at the 30th Anniversary Celebration of the United Farm Workers Union,” Congresswoman Maxine Waters said. “My office was glad to help facilitate this donation to the Smithsonian’s National Museum of American History.”

What’s so special about this photo?

It is widely regarded as the final formal portrait of the labor leader, taken one month before Chavez’s death in 1993.

But it’s not only that he died shortly after the photo was taken that makes the picture so special. It’s uniqueness focuses on what Chavez was wearing in the last portrait.

The photo depicts a smiling Chavez standing with his hands in the pockets of his black United Farm workers Union jacket, a pose that contradicts every image that most people have of the famed labor leader, Miyatake said.

He said that most people tend to see Chavez amid the dust and dirt of farms, rallying the workers, but Miyatake, ever the maverick, wanted something different for his photo session.

“Artistically, you always want to think of the opposite,” Miyatake said. “So I said to myself, ‘What is the exact opposite of working hard as a farm worker? Standing there with your hands in your pocket.’”

Miyatake said he got the idea for the photo from the late Richard Avedon, a celebrity-portrait photographer whose work has appeared in Rolling Stone, Vogue and Life magazines. One of Avedon’s most famous works was his series of photos of celebrities and captains of industry simply standing in front of the camera.

“He took a picture of all these high-profile people standing there doing nothing,” Miyatake said. “So I thought to myself, ‘I’m going to take a Richard Avedon.’”

Miyatake credits two sources for his talent as a photographer: his grandfather, the famed Toyo Miyatake, for teaching him the traditional aspects of craft, which emphasized lighting to make subjects look better than they really are, and Art Center College of Design, where he was taught how to make the photos conceptual and to infuse them with visual impact.

“Basically you want to take a picture that really says something,” he said. “That you feel something. The worst thing someone can say to you as a photographer is, “oh, that’s nice.”

That was the approach Miyatake took when he worked as the personal photographer for former Los Angeles Mayor Tom Bradley.

During the early 1990s, after he was fired from the family photo business and opened his own photo studio, Miyatake was asked to do a portrait of Bradley, which turned out to be his last official portrait as mayor of Los Angeles.

“I think he knew that he was going to decide not to run for reelection after 20 years,” Miyatake said. “I think he figured 20 years [was long enough].”

Many of the ideas for portraits that Miyatake takes come from an art book containing the collected paintings of acclaimed portrait artist John Singer Sargent. Using an idea from the book, Miyatake got the idea to pose Bradley in a full-length pose to take advantage of the former mayor’s tall stature.

Miyatake says that during the photo shoot, he created a scene for Bradley, as he does with all of his subjects.

“You see the book of Los Angeles, the city seal, and the world flags, which represent how he made this city a world-class city,” Miyatake said.

When Bradley passed away in 1998, Miyatake’s portrait photo of the mayor was on display at his viewing at the L.A. Convention Center.

Miyatake said that to get the best portrait photo of a given subject can mean a lot of work that must be done before one single photo is ever taken.

“What you do is you either do research on the person, talk to the person, look at their clothing, study the lines in their face and with lighting, pose with expression and then you try to say something with that picture.”

Miyatake’s method is a long way from the nice guy who takes nice pictures that Miyatake’s father wanted him to be, which he says is the reason why his work will be placed in the Smithsonian right alongside the jacket that Chavez wore in that rare, iconic photo.

Miyatake said that the photo shocked Chavez’s wife, who had never seen anything like it.

“His wife Helen looked at the photo and said, ‘who took this picture? He never takes a picture like this,’” Miyatake said.