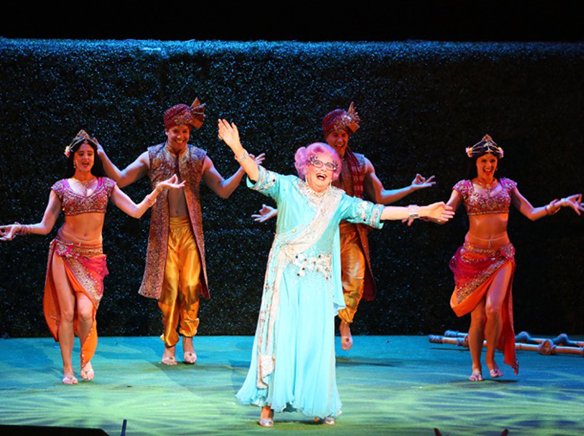 There is nothing like a dame according to a "South Pacific" song lyric. And there is nothing quite like Dame Edna Everage, the brainchild of Barry Humphries who first brought his alter ego Dame Edna to life on the British stage at the Fortune Theater in 1969. While Humphries studied law, philosophy and fine art, he found his true calling in the theatre.

There is nothing like a dame according to a "South Pacific" song lyric. And there is nothing quite like Dame Edna Everage, the brainchild of Barry Humphries who first brought his alter ego Dame Edna to life on the British stage at the Fortune Theater in 1969. While Humphries studied law, philosophy and fine art, he found his true calling in the theatre.

As a result, his career has been a drag in the very best sense of the word. Now his larger than life creation, with purple hair and an attitude that won't quit, has returned to the Ahmanson Theatre with her "Dame Edna's Glorious Goodbye—The Farewell Tour."

For Edna fans, which are legion, don't be too downhearted. Remember, she's 'farewelled' us before on more than one occasion, so perhaps she will farewell us yet again, but to be on the safe side check her out while she's in town. Dame Edna's journey has lasted for 60 years and has transformed this once simple Australian housewife into a mega international star.

And on opening night the L.A. audience was ready for her when she stepped onto the stage, dressed in a bright red dress covered in sparkly, almost blinding jewels. She paid special attention to her fan base in what she called 'the cheap seats,' worrying they might fall from the balcony or the side boxes, which she described as "ashtrays."

I personally think they look like strawberry crates. She also chided us for the way we dress in L.A., noting that in New York they get dressed up to go to the theatre. In fact, if you are shy and hate attention don't sit in the first five rows or you could be part of the show.

For example, in Act II, two people were plucked from the audience to be married by Dame Edna who can do just about anything her fertile mind can envision. The ceremony also involved calling Paul, the son of the lady in question, and the schtick was fun. Of course it could have fallen flat if no one answered Dame Edna's on-stage phone call, or if the newly betrothed couldn't think of a phone number to give her in the first place.

So as Jimmy Fallon would write: "Thank you, Paul, for being at home and answering the phone, and for your mom providing your number." The groom-to-be couldn't recall any family phone numbers or his zodiac sign and was also married—which didn't phase Edna at all.

And bully for her, she made the bit work with her facile ad-libbing and zany bravado despite the challenges. Before the great dame entered we heard from two famous Aussies, Hugh Jackman and Geoffrey Rush, as well as Kelly Osbourne, who said Dame Edna, as her God-mother never sends Osbourne a card—even on her birthday. They spoke to us from on-screen projections, letting us know what we were in for. Of course Edna’s “giga-star” celebrity overcame all negatives.

The show features a group of ensemble dancers (Ralph Coppola, Brooke Pascoe, Eve Prideaus and Armando Yearwood Jr.) who prance and dance with Edna as she sings on several occasions. Piano accompaniment is provided by her musical director Jonathan Tessero. In the playbill she describes her Australian director Simon Phillips as "very nice, but he brings absolutely nothing to the mix.

In America it's got to say 'directed by' so I found somebody comparatively inexpensive and I just put his name on the playbill." Dame Edna can be a bit bawdy, truly gaudy but 'Everage' so much fun overall Dame Edna, at the Ahmanson Theatre in downtown Los Angeles through March 15. For tickets and information call 213-972-4400 or online at www.centertheatregroup.org.

Dissolution of marriage ends with tears and memories