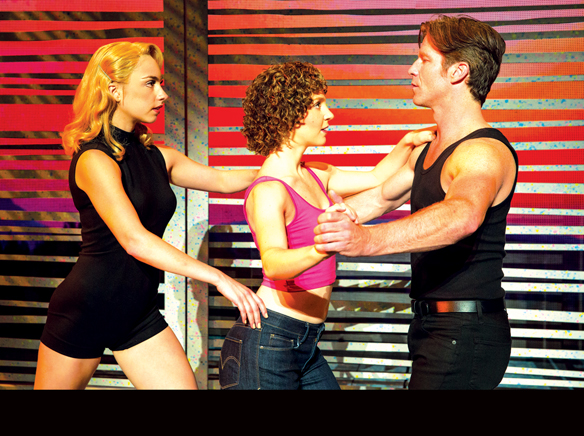 When the film version of  “Dirty Dancing.” was released in 1987, Patrick Swayze not only danced his way into the heart of 17-year-old Frances “Baby” Houseman on screen, he captivated  the collective hearts of women all across the country. Patrick Swayze is gone, but the memory lives on in the lush, romantic stage musical now at the Hollywood Pantages Theatre through Feb. 21.

When the film version of  “Dirty Dancing.” was released in 1987, Patrick Swayze not only danced his way into the heart of 17-year-old Frances “Baby” Houseman on screen, he captivated  the collective hearts of women all across the country. Patrick Swayze is gone, but the memory lives on in the lush, romantic stage musical now at the Hollywood Pantages Theatre through Feb. 21.

In the summer of 1963. Dr. Houseman has taken his wife and two daughters on vacation to a resort in New York’s Catskill Mountains. There are plenty of things to do from golf, swimming and hiking to dance classes. College boys play a dual role as waiters and escorts for the young ladies but in the end it is Baby who winds up having the time of her life.

The show begins with “The Magic Moment Merengue” which earned thunderous applause from the enthusiastic audience on opening night. This fast, furious and sexy ensemble dance number introduces us to the resort’s dance staff, headed by Johnny Castle (Christopher Tierney).  Tierney not only provides the necessary sex appeal and charm, he is a skillful, dynamic performer who has danced with Hubbard Street Dance Chicago, Les Ballet Jazz du Montreal, Houston Ballet and  was in the North American premiere  of “Dirty Dancing.”  He was also in the original cast of “Spiderman: Turn Off the Dark” on Broadway..

Gillian Abbott, a Julliard School graduate who began her professional career in Cirque du Soleil’s Beatles LOVE show, plays the feisty “Baby” who wants to make the world a better place. Her life changes dramatically when she catches the eye of Johnny and becomes his dance partner.

Musical numbers  include “The Time of My Life,” “Hungry Eyes,” “You Do Something to Me,”‘ “Do You Love Me?” and many, many more. The eight piece “Dirty Dancing” orchestra is conducted by Alan J. Plado and features two keyboards, guitar, saxophone, drums, percussion, bass and trumpet

Video and projection design by John Driscoll, coupled with the fluid set design by Stephen Brimson Lewis, give the show an amazing look. Choreography by Michelle Lynch, based on the original choreography by Kate Champion, is vibrant and exciting throughout with ballroom and Latin choreography by Craig Wilson.  James Powell directed.

If you are looking for a perfect Valentine treat for your sweetheart, this show is the romantic answer. And be sure to bring a camera to snap her photo with a life-sized replica of Patrick Swayze in the lobby from Madame Tussauds Wax Museum.

“Dirty Dancing,” at the Hollywood Pantages Theatre, 6233 Hollywood Blvd., Los Angeles, runs through Feb. 21 only. For tickets, call 1-800-982-2787 or online at www.HollywoodPantages,com or www.Ticketmaster.com,,

If you have kids, then you’ve heard of R.L. Stine and his countless Goosebumps novels for young readers.  I first experienced “Goosebumps” when I visited my sister in North Carolina and her youngest son Daniel gave me a few to read because he   said, “They are funny and always have a surprise ending.” And even though I wasn’t a kid when I read them, I found them clever and amusing too.

The film “Goosebumps” stars Jack Black as a mysterious, elusive author who lives next door to Zach and his mother.  They have just moved into the neighborhood to start a new life in a new state after the death of Zach’s dad.  As the teenager is unpacking his things from their car, he notices a girl in the window.  She spots him too and comes to the fence between their two houses to say hello. Soon Stein comes out and tells the young man to stay away from his daughter.  But why is the author so unfriendly? Ah, the answer is a mystery of course and it is the key to the cinematic story which is about to unfold featuring many of the monsters that the prolific author has created for young fans over the years,

At first Zach (Dylan Minnette) stays away, not wishing to cause trouble, but when he thinks Hannah Stein (Odeya Rush) may be in danger he enlists the help of a kid he met on his first day in his new school (Ryan Lee). They break into the Stein house to save her.  Big mistake, but not for the plot..  Soon the monsters in the many Goosebumps stories come to life and that is scary fun.

As R.L. Stein says at one point in the movie, “Every good story has a beginning, a middle and… a twist.”  And it is those twists that make a Goosebumps tale so much fun. “Goosebumps” is rated PG for scary scenes involving all kinds of monsters from giant insects, an army of garden gnomes to an abominable snowman. The monsters are great fun, but their interaction with the town and the students, while clever and exciting, may be too intense for very young children.

“Sicario,” written by Taylor Sheridan and directed by Denis Villeneuve, takes an engrossing violent look at U.S. efforts to control the Mexican cartels and eliminate illicit drug trafficking inside the USA and along the Mexican border.  Emily Blunt plays Kate, a dedicated, very skilled FBI agent who has been selected to work with CIA agent Matt Graver (Josh Brolin) and the mysterious Alehandro (Benecio del Toro).  Who is he, and why is he a part of the CIA/FBI team?  We are kept in the dark, but so is Kate.  She is told to keep her eyes open and remain vigilant. Things will be explained to her in due course.

As the pieces in the puzzle unfold we are brought into the undercover, covert tactics used by the FBI and CIA to find, capture or kill elusive drug lords who are wreaking havoc on both sides of the border.

Sicario,  Spanish for hit man, is a clue to what is gong on in the film as the agents and Alehandro work together to track down a notorious drug lord hidden away in Mexico.  While it is business for the agents, it appears to be personal for del Toro.  But why and who is he anyway?

The film reveals the brutality of the drug lords.  As “Sicario” begins we see Kate and other FBI agents confront a group of Mexican drug cartel members residing in the states, close to the border.  After the bloody shootout that follows, agents make a horrifying discovery. In the walls of the drug smugglers’ hiding place they find countless dead bodies stuffed insides the walls.

The cartel uses all sorts of terrifying ways to retain control over the people in their country who live in constant fear since anyone who gets in their way is killed.  Often bodies are hung up in the town or victims are dissolved in acid.  While much violence and cruelty is depicted or alluded to, it is never overly gratuitous, however, the film is not for the feint of heart.  Rated R for depictions of violence and language. 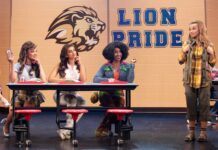 Afterthoughts on the 87th Academy Awards