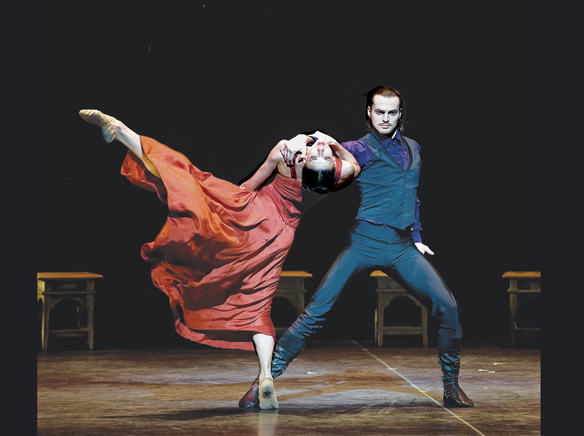 The Eifman Ballet of St. Petersburg, founded in 1977 by Boris Eifman, not only allows its audience to appreciate the beauty of dance it also enables them to empathize with the scenic action on stage as they enter into a world of human passions. A fine example of the choreographer's emotional technique was "Anna Karenina," a ballet that translated Tolstoy's haunting love story into dance. The result was a wordless retelling of Tolstoy's novel that was readily understandable.

The Eifman Ballet of St. Petersburg, founded in 1977 by Boris Eifman, not only allows its audience to appreciate the beauty of dance it also enables them to empathize with the scenic action on stage as they enter into a world of human passions. A fine example of the choreographer's emotional technique was "Anna Karenina," a ballet that translated Tolstoy's haunting love story into dance. The result was a wordless retelling of Tolstoy's novel that was readily understandable.

The Eifman Ballet returns to the Dorothy Chandler Pavilion of the Music Center June 12- 14 to present "Rodin," a ballet dedicated to the life and creative works of the great sculptor Auguste Rodin and his apprentice, love and muse, Camille Claudel.

While Rodin created masterpieces in stone, the choreographer has created a ballet masterwork dedicated to the incomprehensible mystery of the creative process.

All ticket holders for "Rodin" can present their ticket or proof of purchase at LACMA to get $5 off admission through July 12, which includes access to LACMA's B. Gerald Cantor Sculpture Garden featuring Rodin's sculptures and theoption to take a free docent led tour of the garden on weekends. For more information go to lacma.org.

To order tickets for "Rodin" at the Dorothy Chandler Pavilion call 213-972-0711 or go online to musiccenter.org/rodin.

In Disney's "Tomorrowland" we start in the present, flashback to the past, then search for a way to reach a secret place where a bright future is still possible. But is it already too late to keep the world as we know it from self-destruction?

If it sounds complicated, well so is the plot for "Tomorrowland," co-written and directed by Brad Bird who once described the film as a "science fiction action adventure road movie fable, kind of."
The film is at its most enjoyable at the start when a young Frank Walker (Thomas Robinson) comes to the 1964 World's Fair in New York with his invention that still has a few kinks in it. He brings it to the attention of a scientist there, David Nix (Hugh Laurie, TV's Dr. House.) True to his name, Nix nixes the boys' invention for flying through the air via his not yet perfected contraption made from an old vacuum cleaner.

But a young girl named Athena (Raffey Cassidy), the same age at the time as Frank, takes a liking to him and tries to help him realize his dreams. Later this hopeful young inventor becomes the jaded genius recluse (George Clooney).

If you were around in 1964 it was fun to revisit the N.Y. World's Fair where Disney presented all sorts of futuristic ideas and rides like "Small World." It was also fun to enjoy the youthful playfulness of the kindred souls, Athena and young Frank.

In the present the story introduces us to Casey (Britt Robertson), a very bright, optimistic teen bursting with scientific curiosity who is trying to keep the NASA space center in Cape Canaveral from being demolished. Her engineer dad (Tom McGraw) works there and if the center is closed he will be out of a job.

Her methods of preservation are considered trespassing and she is soon taken into custody. When released she finds a mysterious, unusual pin with a big red T on it nestled in among her possessions.

Where did it come from? What is it capable of doing? Will it lead to a great adventure or get her into serious trouble? The answer to the last two questions is a definite "Yes."

Bird, who won an Oscar for his 'practically perfect in every way' animated gem "Ratatouille," about a little rat who dreams of becoming a great French chef, also created two other animated treasures, "The Incredibles" and "The Iron Giant."

Somehow the animated stories were more focused and magical than this ambitious, big budgeted film that is weighted down by too many plot twists and over budgeted special effects.

To the film's credit, its heart is in the right place as it tells the audience that the hope for the future lies in preserving the earth, its resources and animals. But it needed judicious editing to make the plot less plodding and fewer over produced chase sequences. Shorter, focused and more centered would have been a far better route to a great big beautiful tomorrow.Rated PG for scenes of sci-fi action and peril..

If you see the film at the El Capitan in Hollywood, there are some added extras. Greg Wilson's "The Magic of Imagination" is presented live on stage prior to the film and after the screening there is a behind-the-scenes look at how the filmmakers created the world of "Tomorrowland" that includes costumes, props and concept drawings.

Plus, see a display from Walt Disney Imagineering showcasing Disneyland attractions featured in the movie.

Tips for cleaning your kitchen