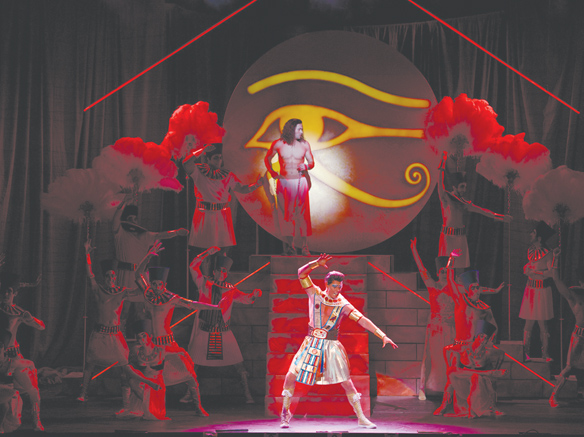 This lighthearted family musical recounts the trials, tribulations and eventual triumphs of Joseph, a biblical hero from the Old Testament who was his father's favorite son. Unfortunately Jacob's favoritism results in plenty of hard feelings and turns Joseph's eleven brothers against him.

This lighthearted family musical recounts the trials, tribulations and eventual triumphs of Joseph, a biblical hero from the Old Testament who was his father's favorite son. Unfortunately Jacob's favoritism results in plenty of hard feelings and turns Joseph's eleven brothers against him.

The last straw in this family feud comes when Jacob presents Joseph with an amazing colorful coat. After that his jealous brothers decide to sell their unsuspecting younger brother into slavery in Egypt.

While this sounds sad and really bad for poor, poor Joseph, the cheerful musical focuses on the rewards of faith and hard work. Joseph always does his best and as a result he becomes a hero, prized by the Pharaoh (Ryan Williams).

A musical theatre staple for many years, "Joseph and the Amazing Technicolor Dreamcoat" is filled to the brim with songs like  "Any Dream Will Do" and the beautiful, melancholy ballad "Close Every Door" sung by Ace Young as Joseph. Young's wife Diana DeGarmo co-stars as the narrator. Both Young and DeGarmo got their start on TV's  "American Idol," met while performing on Broadway in a production of "Hair" and now are co-stars in the current production of "Joseph."

This latest version of "Joseph" still retains the basic story line and musical score, but production values are different from the classic staging previously at the Pantages. One example is the use of video projections rather than actual sets.

This technique is at its best in Act II. Another variation is the opening of the show which begins in the present day with an Overture and Prologue about modern dreamers like Joseph. Then the show shifts from the present into the biblical past. Another change is the finale entitled "Joseph Megamix."

In this new segment Joseph, the Narrator and ensemble perform a blend of all the show numbers in modern dress. The result is a "Joseph Rock Concert" that reprises all the music from the show performed with jazzy lighting effects and modern dance moves, bringing us once again into the present.

The ensemble performers steal the show throughout, starting with "One More Angel in Heaven," where the brothers express mock sorrow at the loss of Joseph, sold into slavery thanks to them. And in Act II the brothers bring down the house as they sing "Those Canaan Days."  This number, led by brother Simeon (Paul Castree), was a show-stopper that received thunderous prolonged applause..

"Joseph and the Amazing Technicolor Dreamcoat" was directed and choreographed by Andy Blankenbuehler, who won a Tony for "In the Heights" and was nominated for "Bring It On" and "9 to 5," runs through June 22 at the Hollywood Pantages, 6233 Hollywood Blvd. (just east of Vine St.). Tickets are available at  HYPERLINK "www.HollywoodPantages.com"www.HollywoodPantages.com or  HYPERLINK "www.Ticketmaster.com"www.Ticketmaster.com or by calling 1-800-982-2787 as well as at the Hollywood Pantages Box Office. Running time: 2 hours and 15 minutes including intermission. Tickets start at $25 in the orchestra.

In Disney''s box office smash "Maleficent" Angelina Jolie's prominent cheek bones are now even higher and more pronounced (thanks to makeup) as she takes on the role of a good fairy gone bad.

In the 1959 Disney animated film "Sleeping Beauty," based on fairy tales by Charles Perrault and the Brothers Grimm, the evil Maleficent puts a curse on Princess Aurora because she wasn't invited to the baby's christening. That hateful black robed creature had no redeeming characteristics, but in the new live-action version of  "Sleeping Beauty" screenwriter Linda Wolverton gives the classic story a whole new twist. As in Broadway's "Wicked," inspired by "The Wizard of OZ," we see the entire story from the villain's point of view, proving that there are always two sides to any good story.

As the film begins the young Maleficent, played by 14 year old English actress Isobelle Molloy, is a happy, spirited young fairy who loves every creature in her magical world. One day a human named Stefan comes to the edge of her forest. He is young and curious and she allows him to enter her realm.

Over time they fall in love, but when he has the chance to become king he betrays her in a brutal way in order to gain the throne. His cruelty inspires her rage and hatred and is the reason she places a curse on his newborn daughter.

To protect his baby, King Stefan (Sharlto Copley) sends Aurora to live with three fairies who hide her from the now vengeful Maleficent. But Maleficent is clever and like a dark shadow she is ever present in the young girl's life, observed by Aurora but never seen by the three dippy fairy "aunties.".

It's fun to watch Jolie interact with Aurora from cradle to toddler and into her adulthood as she nears her 16th birthday. On that day, if she returns to her father's kingdom, she will prick her finger on a spinning wheel spindle and die. Only "true love's kiss" can break the spell.

One of the sweetest moments in the film happens when toddler Aurora runs to Maleficent in the enchanted forest and goes smiling into her arms. That angelic little tot is actually Angelina's own twin daughter. The older Aura is played by Elle Fanning who will soon become the "sleeping beauty" of the story.

While this new version has most of the characters from the animated film, the king and queen, the three fairies, a fire spewing dragon and a handsome young prince, the plot twists and turns provide interesting, unexpected surprises as the dark fairy is allowed to tell the story from her perspective.

Unlike most Disney films, this one is rated PG for sequences of fantasy action and violence, including frightening images.

As an added plus, now through July 6 only, the El Capitan Theatre in Hollywood will present a grand scale magic show on stage prior to each showing of “Maleficent.” Magician Greg Wilson and his five assistants will perform an extravagant turn-of-the-century style performance where he will saw a woman in half, pull rabbits out of hats and execute the amazing "East Indian Rope Trick."

Some guests at each show will get the chance to go on stage to witness the tricks up close. Another bonus is a display of props from the movie. For tickets call 1-800-DISNEY6 or visit www.elcapitantickets.com.