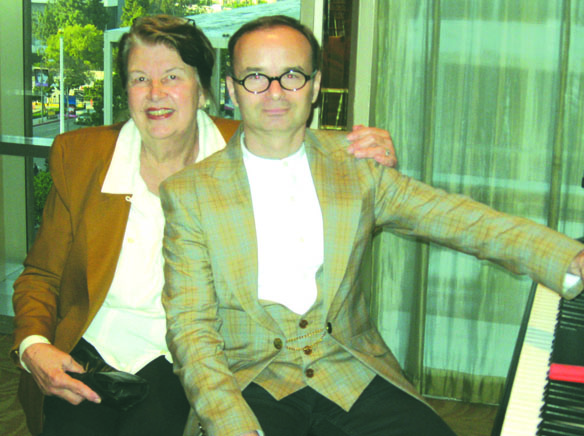 Now this colorful fish tale is back in 3-D for a whole new generation to ‘sea’ and enjoy.

Now this colorful fish tale is back in 3-D for a whole new generation to ‘sea’ and enjoy.

“Finding Nemo” is a heartwarming story that deals with a father-son relationship between two clown fish, Marlin (Albert Brooks) and his son Nemo (voiced by Alexander Gould), as well as the friendship that develops between Marlin and Dory, a blue tang fish who joins Marlin in his quest to rescue his son.  Dory is adorable but oh so forgetful.

Marlin is overly protective and at one point little Nemo gets so upset by his father’s loving, stifling presence he swims out into the deep and is captured by an Australian diver who takes the colorful little fish home with him and places him in the aquarium in his dental office.

Horrified, Marlin swims off to rescue his son and in the process he meets all sorts of creatures of the sea, including Dory (voiced by Ellen Degeneres).

For adults, much of the fun in seeing “Finding Nemo” is figuring out who’s who in the talented voice cast.  Some voices may come as a surprise like the voice for Bruce, the great white shark who wants to stop eating fish and has formed a support group for fish eating addicts.

Barry Humphries (aka Dame Edna Everage) is the voice for this intimidating denizen of the deep.  Geoffrey Rush (“The King’s Speech”) is the gossipy Australian pelican, Nigel and the fish in the dentist’s aquarium who look after little Nemo include Gill (Willem Dafoe), Bloat, a blowfish voiced by Brad Garret (“Everybody Loves Raymond”) and Peach a motherly starfish (Allison Janney).

And the Surfer Dude sea turtle, Crush is voiced by none other than the writer/director Andrew Stanton.

This colorful tale of life under the sea evolved from several personal situations in Andrew Stanton’s life.  One being a visit to Marine World in 1992 which got him thinking about the amazing possibilities of creating an undersea world in computer animation.

Another part of the story puzzle came from childhood memories of the aquarium in his family dentist’s office, where as a kid he wondered what the fish felt.  Did they miss their home in the ocean?  Would they try to escape and go back to the sea?

The final piece in the eventual story was his relationship with his son.  He recalled a visit to the park when the boy was five and as they walked he kept thinking how much he missed spending more time with the little boy, but he also kept telling him “Don’t touch that, don’t do this, you’re going to fall.”

Another voice inside his head said “You are wasting this special time with your son right now.”  He felt his fears for his son were keeping him from being the good father he wanted to be and he says “that revelation helped me put all the pieces of the story of Nemo into place.”

He then pitched his story idea to his mentor at Pixar, John Lasseter, preparing all sorts of visual aids to show how colorful and wonderful the story could be.  When he finished he asked Lasseter what he thought.  His reply was “You had me at fish.”

If you are a lover of fine music, fine food  and good, artistic fellowship you will be delighted to know that Le Salon de Musiques returns for it’s third season on Oct.14.

The first concert will feature Glika’s Serenade for Piano Sextet on a theme from Bellini and Lyapunov’s Piano Sextet op 63.  The concert will be introduced by musicologist Julius Reder Carlson and performed by Roger Wilkie and Sarah Thornblade on violins, Bob Brophy on viola, Ron Leonard on cello, Nico Abondolo on bass and Gavin Martin on piano.

This distinctive series is being performed on the 5th floor of the Dorothy Chandler Pavilion on the second Sunday of every month, beginning with this concert on Oct. 14  and will run through May 19, 2013.

Noted French pianist and artistic director Francois Chouchan says the musical selections for the 2012-13 season were chosen because “So many beautiful, melodic, lyrical and romantic pieces are still rarely performed.

My idea was first to find and choose some of the most inspired lesser known and great German, Russian, Polish and French composers and perform their expressive, touching and moving works for a whole new audience which makes this season unique.”

For tickets and further information contact; www.leSalondeMusiques.com or call 310-498-0257.