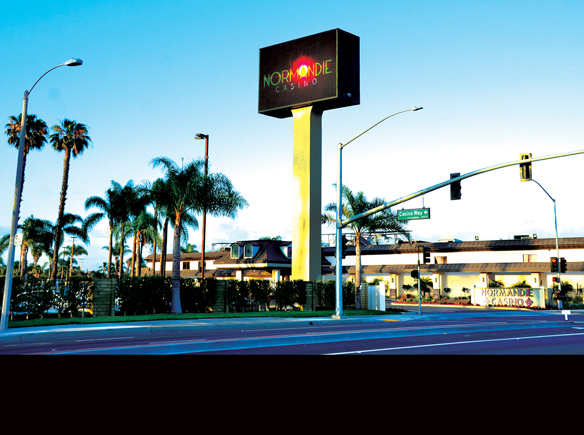 Larry Flynt’s Lucky Lady Casino, which was set to open on Monday for renovations at the former Normandie Casino, is on hold while the adult entertainment mogul battles the city over money issues and apparent signage objects. Thus far, the owner of the Hustler Casino in Gardena has backed out of negotiations for his second casino.

Flynt is looking for tax breaks on his Lucky Lady Casino and the City instead wants him to submit a minimum of $800,000 monthly in taxes on his two casinos.

Larry Flynt’s Lucky Lady Casino, which was set to open on Monday for renovations at the former Normandie Casino, is on hold while the adult entertainment mogul battles the city over money issues and apparent signage objects. Thus far, the owner of the Hustler Casino in Gardena has backed out of negotiations for his second casino.

Flynt is looking for tax breaks on his Lucky Lady Casino and the City instead wants him to submit a minimum of $800,000 monthly in taxes on his two casinos.

He said he won’t sign any final agreement enforcing tax requirements or other changes. And added that the city’s tax structure would make it “impossible” to get a return on his investment.

“I’m no fool. I’ve never heard of a deal like that,” Flynt argued. “I acted in good faith.”

He said that in the 16 years he has done business in Gardena, he has paid $80.5 million.

“You would think that somebody that has done that much for this city, and got so little in return, it’s easy to see that I feel like I’m treated like a second-class citizen,” he said. “And I don’t like it one bit.”

Flynt said he will have to spend $60 million over the next four year to make the Lucky Lady Casino profitable, double the amount he put into the Hustler Casino startup in 2000.

Flynt last battled the Council more than 16 years ago, when officials objected to the name Hustler for his new casino. Despite finding the name offensive, elected officials relented and allowed Flynt to bear the brand name he is known for worldwide.

As for the Lucky Lady agreement, City Manager Mitch Lansdell said he did add a last-minute provision.

“Yes, I did add a ninth-hour provision that the two casinos must meet $800,000 a month to effectuate the other part of the agreement,” Lansdell told the Daily Breeze. “I totally understand the feeling of Mr. Flynt relative to this, but I also have to look at what it takes to make the city sustainable.”

The $800,000 figure is based on an average amount the two clubs have historically paid.

As for signage, legally the City cannot enforce a new design choice.

That hasn’t stopped some officials from voicing their disapproval.

The illustration of a sexy lady sitting on the Y letter of the Lucky Lady sign in front of the new casino, is not what the council wants the public to be see as it travels east on Rosecrans toward the freeway.

“I still believe [that the current image} is offensive to woman,” Councilwoman Tasha Cerda told Flynt. “It’s one thing to drive down Rosecrans and see these kind of images versus if you go inside the club… [where] these images are kind of expected.”

The publishing mogul said that the City Manager disapproved of the first signage he submitted. He told the Council at the July 12 meeting, that the current signage is his second submission.

“The first rendering, the City Manager (Mitch Lansdell) found unacceptable,” Flynt said. “He wanted it toned down, that it was too risqué. I didn’t want to pick a legal fight, I just wanted to get it approved.  So we redesigned it, and it was submitted (by the City Manager to the Council.) But at the last council meeting, we didn’t get a vote on it.”

According to Flynt, the current signage is “perfect the way it is.” He cited the dispute on a matter of artistic taste, and reminded the Council that the late justice Antonin Scalia once said that government should not legislate taste. That it’s an “exercise in futility.”

The Council heard Flynt’s plee, but voted 3-1 to deny the Luck Lady tax breaks on revenue that exceeds $2 million a month. Councilman Dan Medina was the lone dissenting vote.

“Sometimes no deal is better than a bad deal,” Flynt said.

Flynt told the Breeze that he will do everything in his power to take on the Council, even to upseat certain officials at the next election. He said he would support candidates to the council who are supportive of the gaming industry.

Warbirds are grounded in man’s violent history (The Long View)