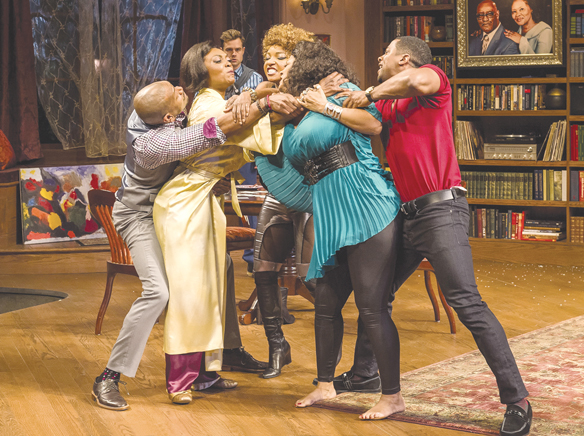 "Immediate Family," by playwright Paul Oakley Stovall, takes a comedic, yet sensitive look at the issues of gay marriage and racism in modern America. It is as up to date as tomorrow's headlines asthe play, like the Supreme Court, ponders the future of gay marriage in American society. Whether you are pro or con on the outcome, you can still enjoy Stovall's take on the issue as he brings the Bryant family together for the upcoming wedding of their younger brother Tony (Kamal Angelo Bolden).

"Immediate Family," by playwright Paul Oakley Stovall, takes a comedic, yet sensitive look at the issues of gay marriage and racism in modern America. It is as up to date as tomorrow's headlines asthe play, like the Supreme Court, ponders the future of gay marriage in American society. Whether you are pro or con on the outcome, you can still enjoy Stovall's take on the issue as he brings the Bryant family together for the upcoming wedding of their younger brother Tony (Kamal Angelo Bolden).

Everyone is excited about Jesse Jr. (Bryan Terrell Clark) coming back to Chicago for the nuptuals since he has been living out of state for several years. But as the play progresses we discover that Jesse, as well as Tony, have a few secrets that may be exposed before the wedding takes place.
Add to the mix, Jesse's childhood best friend and next door neighbor, Nina Cole (J. Nicole Brooks), a flamboyant, outrageous lesbian and a very cool dresser. She may also come in handy when Kristian, Jessie's secret partner, shows up. Jessie knows they can't bunk together in puritanical Evy's house so he convinces Nina to let Kristian stay at her house. At present the family knows the young Swede only as Jessie's friend who will be photographing the wedding for free.

Stovall uses the family get-together to spark conversations over controversial topics that have been hidden. It also surfaces issues about which family members are selectively judgmental. Being gay, for example, is one thing, but having a white partner is unacceptable. Jesse's reply to brother Tony is: "He's not white, he's European."

While there is a lot of fast-paced comedy dialogue, the play is at its best when it talks about sensitive issues within the family. The specter of their late minister father, for example, is ever present in a huge portrait of the Bryant parents hanging prominently in the living room. For Evy morality is of prime importance in all things, including her class choices for black heroes. This is probably why she is not at all close to their half-white sister Ronnie Hahn (Cynda Williams). who reminds her of her father's infidelity.

The set, designed by John Iacovelli, conveys affluence, good taste and features windows on either side that let in a sense of the outdoors. The living room, kitchen, and outdoor patio area seen on stage are a dream even if the family dynamics inside aren't as comforting.

Phylicia Rashad (TV's "The Cosby Show") directs. She also recently helmed  August Wilson's play "Joe Turner's Come and Gone" at the Taper. Her TV sitcom experience works particularly well for "Immediate Family" as she keeps the many short scenes flowing seamlessly throughout the play which is presented without an intermission.

t's obvious she loves both of her brothers, but Jesse Jr. is her favorite, despite his long absence from any family events. It soon becomes clear that conflict will erupt when Jesse's roommate and partner, Kristian (Mark Jude Sullivan) shows up for wedding
"Immediate Family," at the Mark Taper Forum, 135 North Grand, downtown LA, through June 7, 2015. For tickets call (213) 628-2772 or online at CenterTheatreGroup.org.
***
Actress Julianne Moore won a well-deserved Oscar for her moving performance in Sony Pictures "Still Alice." In the film she portrays Alice Howland, a happily married woman with three grown children. She also has a career as a renowned linguistics professor at a prestigious university. Her life changes dramatically when she receives a diagnosis of early onset Alzheimer's disease.

Alice struggles valiantly to stay connected to the person she once was, but the progression of her disease places stress not only on her, but on her entire family. They all struggle to keep Alice functioning for as long as possible.
Bonus features include deleted scenes and three in-depth featurettes. The first is "Directing Alice," a look at Richard Glatzer & Wash Westmoreland's unique and inspiring journey to create "Still Alice." In "Finding Alice" the cast, filmmakers and Alzheimer's experts discuss what went into creating an accurate depiction of Alice's disease. Executive producer and longtime Alzheimer's advocate Maria Shriver, who this year launched her Wipe Out Alzheimer's Challenge in partnership with A Woman's Nation and the Alzheimer's Association, is one of the speakers. In the third feature, "Interview with Composer Han Eshkeri," the composer shares insight into the creation of the soundtrack.

The film has a run time of approximately 101 minutes and is rated PG-13 for mature thematic material and brief language, including a sexual reference.

Bake like a pro for the holidays with chef-worthy desserts

Taking the next steps after the election