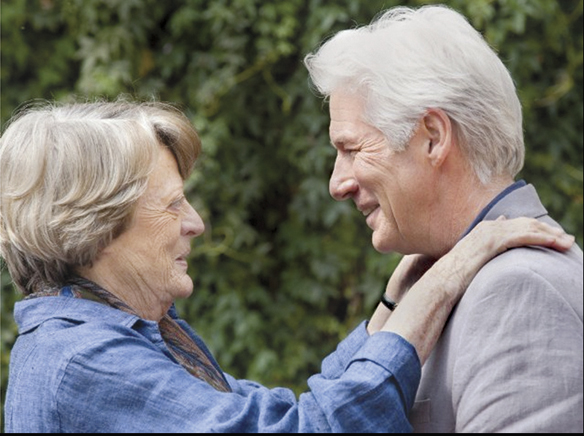 The hotel sounded exotic in the online ad and the price was right.  But when they arrive at their destination, things are not what they expected.

The hotel sounded exotic in the online ad and the price was right.  But when they arrive at their destination, things are not what they expected.

Dev Patel, the young hotel owner with a big dream but very little expertise, convinces them to stay, despite the chaos and unfamiliar conditions and locale. How each of the Brits adapts to their new adventure was charming and at times quite touching and emotional.

In the sequel they are still there for the most part and Patel is planning to open yet another hotel for senior citizens.  While some of the characters are missing, Dev Patel is still the brash and often bumbling young hotel owner and Maggie Smith is now his assistant manager, thanks to her business skill and common sense.

The story begins in Los Angeles this time.  Dev and Maggie have come to the U.S. seeking financial aid so that they can open yet another Marigold Hotel in India.  As always Maggie is feisty and for the most part, fun.  She is also the brains of the operation, although Patel feels he has a great sense of intuition on how things should be handled.

A prime example of this is his certainty that the newest guest, Richard Gere, has been sent from the home office to check on him and the potential of yet another Exotic Marigold Hotel.  But is he right?

Dame Judi Dench and Bill Nighy are now a duo, sort of, but they have not actually made a commitment, even though it is obvious they care deeply about one another.

In Ol Parker’s screenplay, the story introduces quite a few plot lines all at once, making it a bit difficult for the viewer to figure out just where the story is going.

If you saw the first film things would be easier to follow, but eventually all the pieces fall into place. Also in part two, Patel and his sweetheart are planning their wedding, but her brother’s good friend gets in the way. He is rich, handsome, calm and a better dancer so Patel becomes truly jealous and somewhat unhinged.

The film, from Fox Searchlight, is rated PG, and while pleasant and light-hearted overall, it is not as enjoyable as the original.  On the plus side, there is a big Bollywood dance finale.

“Danny Collins,” written and directed by Dan Fogelman, stars Al Pacino as a pop-rock singer.  It begins with Pacino, as Danny, actually singing in concert. His style is a lot like Neil Diamond and his opening song sounds a bit like “Sweet Caroline.”

The crowd obviously loves him as he performs all of his old hits.  He seems satisfied with the status quo, but things change at his surprise birthday party thrown by his sex-kitten bimbo gal pal.

That night his best friend and business manager, Christopher Plummer, presents him with a very special gift–a letter written to him in 1971 by none other than John Lennon and Yoko.  Sadly, or was it destiny, the letter was never presented to him until now. Lennon praises him and indicates that he would love to help him write his own songs.

The idea strikes a cord in the star who decides to make some major life changes.  One being, go to New Jersey and look up the son he has never met, played by Bobby Cannavalle. When he arrive at his son’s home in his sexy red Mercedes he discovers he also has a very special daughter-in-law (Jennifer Garner) and an absolutely adorable, but hyper active, six-year old granddaughter (Giselle Eisenberg).

The blonde, bouncy tyke takes to him right away, but it’s a different story when he meets his long lost son who wants no part of him. However, the determined Danny doesn’t give up easily.

Before heading to see his son he ensconces himself in a luxury hotel in Jersey where he has a baby grand piano installed in his room.  His plan is to write his own music once again.  But will old fans take to something new?

Pacino can turn on the charm, despite the fact that he still drinks too much, he is determined to quit using drugs at this point because he wants to turn his life around and reclaim his long lost family. Another goal is to convince the hotel manager (Annette Benning) to have dinner with him. He likes the fact that she has spunk, is more age appropriate and is fun to talk to. She is also hard to get and that is a another welcome change.

In a disclaimer at the start of the film it states, “This story is kind of based on a true story–a little bit.”  And the kind of true part has to do with an actual letter John Lennon wrote in 1971.

This time Pacino is not a Mafia Don or a Serpico cop, he is a loveable, but very flawed man who wants to start life over, but can he?  From Universal Pictures, rated R for language, drug use and some nudity.