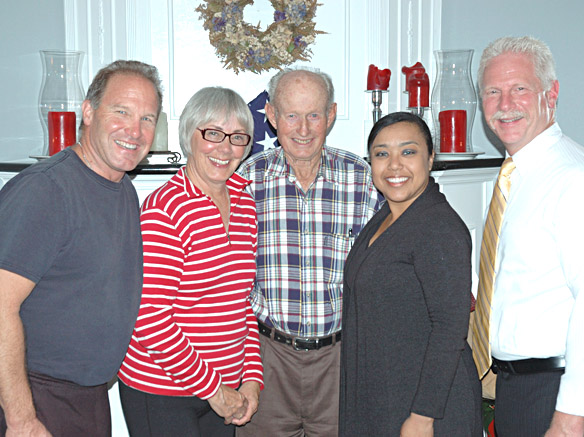 The members of the Gardena Purche Avenue Neighborhood Watch had a rare treat at their April meeting when their namesake, Roy Pursche, spoke to them about his life farming and growing up in the early Gardena Valley.

The 86-year-old Pursche is a third generation descendent of German immigrants, who originally came to this area as bakers in the late 19th century.

The members of the Gardena Purche Avenue Neighborhood Watch had a rare treat at their April meeting when their namesake, Roy Pursche, spoke to them about his life farming and growing up in the early Gardena Valley.

The 86-year-old Pursche is a third generation descendent of German immigrants, who originally came to this area as bakers in the late 19th century.

When health issues forced them out of the baking business, they settled on farming, which was a burgeoning enterprise in the Los Angeles area in the early part of the 20th century. After struggling with farms in several locations, the Pursche family eventually purchased 80 acres bordered by 154th Street and Manhattan Beach Boulevard, and Van Ness Avenue and Crenshaw Boulevard. Gardena had yet to become incorporated and this area was known at the time as Western City. The Pursche’s then purchased an additional 13 acres between Manhattan and Redondo Beach boulevards. Their farmhouse was located on the land now occupied by the Ralphs Supermarket at Van Ness and Redondo Beach Boulevard. This land became known as the Pursche Ranch, with the area north of 154th  (the location of the monthly neighborhood watch meetings) known as the Dickenson Ranch.

The Pursche family raised lettuce, cabbage, cauliflower and tomatoes on their farm, with most of the produce being shipped out by railcar at the Moneta Vegetable Exchange at 168th Street and Western Avenue.

Farming was good in the Gardena Valley through the 1920s and ‘30s, but there were some casualties.  Most notable of these was the Dickenson Ranch, which the bank foreclosed on, and which would go on to be one of the first farms to be developed into a subdivision of new homes.

In 1939, demand for ships to sustain the war effort in Europe created thousands of jobs in nearby Wilmington and San Pedro. Workers, many escaping the dustbowls of Oklahoma, headed west to fill the jobs and soon demand for housing shot up. Throughout the old Dickenson Ranch area, small track homes, selling for the princely sum of $1,750, began sprouting up in the new development.

Roy Pursche never stepped foot on this part of the land until his appearance at the neighborhood watch meeting. Upon his arrival he quipped, “This is the first time I’ve stepped on this land in 70 years.”

It was during this time of the development of the subdivision, that one of the streets was named in honor of Roy’s grandfather, Carl Gustav Pursche, one of the original Gardena City Councilmen. Through a clerical error, the “s” was left off of the family surname and the streets, which run through Torrance, Gardena, and Hawthorne, all became known as Purche Avenue.

A flight in an open cockpit, biplane from the old Gardena Valley Airport, located at Rosecrans and Gramercy, gave the young Roy Pursche his first taste of aviation and he became hooked. He soon enlisted in the Army Air-Corp and had a long career as a fighter pilot, before retiring as a lieutenant colonel in 1972. He is still active today, and farms 2,000 acres in Seal Beach at the Pursche Ranch.