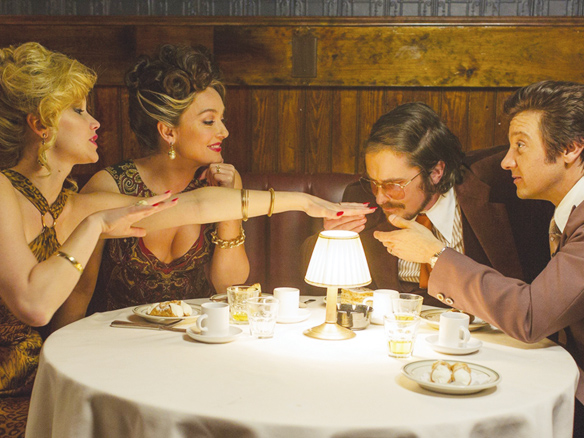 “American Hustle” garnered double digit Academy Award nominations, ten total, but came away empty handed on Oscar night.  That being said, it was a big winner at the SAG Awards, winning for best ensemble performances in a motion picture.  It also won a Golden Globe and New York Film Critics Circle Award in the Best Picture category and received Oscar nominations in all four acting categories and was in contention for best picture, best director and best screenplay Oscars. All in all, that  adds up to one fine dramedy now available on DVD.

“American Hustle” garnered double digit Academy Award nominations, ten total, but came away empty handed on Oscar night.  That being said, it was a big winner at the SAG Awards, winning for best ensemble performances in a motion picture.  It also won a Golden Globe and New York Film Critics Circle Award in the Best Picture category and received Oscar nominations in all four acting categories and was in contention for best picture, best director and best screenplay Oscars. All in all, that  adds up to one fine dramedy now available on DVD.

Director David O. Russell’s caper is a fictionalized version of the real life Abscam scandal of the recent past when FBI agents used entrapment techniques to nab corrupt government officials.  In the film Bradley Cooper plays an overly ambitious FBI agent eager to make a name for himself in the Bureau.  To do so he enlists the cooperation of two small time con artists.  The con artists in question are Irving Rosenfeld (Christian Bale) and his clever, classy partner Sydney Prosser (Amy Adams).  Cooper has entrapped these two for scamming, and in return for their cooperation he will have charges dropped if they help him capture bigger prey–government crooks.

The film is lots of fun and you find yourself really liking Irving, who turns out to be a con artist with a conscience of sorts as well as a good heart, even though he has a bum ticker.  Adding to the plot twists and turns are love triangles and the Mafia  when the New Jersey mayor Carmine Polito (Jeremy Renner)  decides to accept Irving’s help to get money from a rich Arab Sheik (a fake) in order to have funds to revamp Atlantic City which will bring in jobs, but Polito also brings in the mob in order to make everything work well and profitably.  Soon things start to look pretty shaky for Irving who is caught in the middle.  His unpredictable wife, Rosalyn (Jennifer Lawrence who is absolutely great) could be the spoiler causing everything to collapse.  She is jealous and also vengeful because she hates the fact that her husband is in love with his business partner, Amy Adams.  The constant plot twists, romantic ups and downs add tension and fun to the proceedings.  The movie is a great caper.  It is also great fun.  Perhaps the funniest bit in the entire movie has to do with a microwave oven given as a gift to Irving from his new found friend, the mayor.

“American Hustle,” like Russell’s “Silver Lining Playbook,” is moving, emotional and truly involving.  While not an Oscar winner, the film is a winner in every way.  From Sony Pictures, rated R for pervasive language, some sexual content and brief violence.

The DVD and Blu-ray have a featurette on the making of “American Hustle” plus deleted scenes.

"Delivery Man" is an endearing comedy about a middle aged underachiever, David Wozniak (Vince Vaughn), who works with his two brothers in their father's meat business.  David is the company's delivery man who soon discovers he has delivered a lot more than meat during his lifetime.

Twenty years earlier, in order to raise money to send his parents on a dream trip of a lifetime, he donated to a fertility clinic and as a result he unknowingly fathered 533 children. The donations were made anonymously, but now 142 of his offspring want to find their biological father known only by his code name Starbuck..  When a representative from the clinic suddenly shows up at his apartment with photos and information on each of the 142 adult children in question, David is shocked and horrified to discover that he is definitely an overachiever of grand proportions. David can't process this overload of information.  In fact he is dating a woman he loves, who is pregnant with what he thinks will be his first child. At this point he doesn't feel capable of caring for one child much less 142.  Panic sets in. What will his girlfriend think of him?  How will his family react and what will happen if such a bizarre story leaked out to the media as it surely would if his identity were revealed.

David's friend and truly bumbling lawyer advises against making any contact, but curiosity causes David to look inside the envelope where he discovers that one of his sons is a noted basketball player on a local team.  He and his lawyer pal go to a local game and cheer the player on just as any proud papa would do.

The comedy takes shape and warmth as David decides to make contact with some more of the young adults he has sired without ever revealing his true identity.  At this point he sees himself more as a guardian angel in their lives rather than as their biological father. Soon David, a warmhearted lovable guy, finds himself emotionally drawn to each child he locates and they bond with him as well. Unfortunately he is afraid to reveal his true identity to his newly acquired family, not only for legal reasons but for his personal protection as well.

The story starts off slowly at first, but once David makes contact with his newly discovered children the film takes off. Writer, director Ken Scott makes it clear how important a biological father is in the life of a child, not just for health and genetic information but for love, support and connection as well.  This is where the film excels.  "Delivery Man" won't ever win an Oscar, but it may win, or at least warm, your heart

Bonus features on Blu-ray and Digital: "Building Family" which explores the challenges and fun of creating this modern family.  Also learn how the 142 young actors cast as biological siblings bonded both during and after production. "Vince Vaughn: Off the Cuff" features Vaughn delivering comedy improvisations. Bloopers and a Deleted Scene are on Blue-ray, Digital and DVD.

March is National Nutrition Month: tips to recharge your resolutions