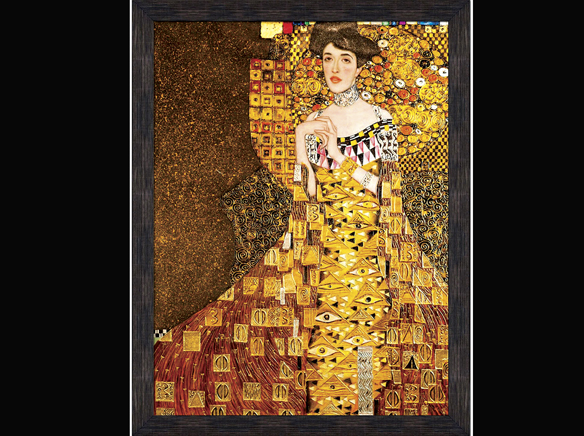 Adele Bloch-Bauer may not be a familiar name, and yet if you are an aficionado of Gustav Klimt's sensuous, luminous portraits you are familiar with her exquisite face. In fact her portrait is the Austrian equivalent of the Mona Lisa. It was commissioned by her adoring husband, Ferdinand in the early 1900s and when it was unveiled in 1907 it both captivated and offended Viennese society.

During World War II the Nazi's confiscated the portrait along with other Klimt paintings owned by the Bloch-Bauer estate.

Adele Bloch-Bauer may not be a familiar name, and yet if you are an aficionado of Gustav Klimt's sensuous, luminous portraits you are familiar with her exquisite face. In fact her portrait is the Austrian equivalent of the Mona Lisa. It was commissioned by her adoring husband, Ferdinand in the early 1900s and when it was unveiled in 1907 it both captivated and offended Viennese society.

During World War II the Nazi's confiscated the portrait along with other Klimt paintings owned by the Bloch-Bauer estate.

In 1943 the Nazi's staged a large Klimt exhibition in Vienna, concealing the identities of the Jewish women who posed for the artist. Adele's portrait was identified simply as "Lady in Gold" and at this point became the possession of the National Gallery in Austria. Ferdinand's gift to his wife was no small investment. At the time the cost of the portrait was equal to one-fourth the value of a well-appointed, well furnished country villa. Today the painting is worth $135 million.

"The Woman In Gold," a Weinstein Co. and BBC film now available on DVD, details the riveting true story of Adele Bloch-Bauer's portrait and her niece's battle to wrest it away from the Austrian government with the help of her young lawyer Randol Schoenberg (Ryan Reynolds) the grandson of composer Arnold Schoenberg. Helen Mirren is perfectly cast as Maria Bloch-Bauer Altmann, Adele's niece.

The film begins in Klimt's studio as he applies the gold leaf to Adele's gown. Are they lovers? Soul-mates or just intellectual friends? Their relationship is not spelled out as the story inter-cuts between past and present. Adele and Ferdinand share their home with his brother Gustav and her sister Therese and their children. This was a perfect arrangement since Adele was unable to have children of her own. She was especially close to her niece, Maria and on Maria's wedding day she gives her the beautiful diamond choker she wore when she posed for her gilded portrait. Eventually the necklace, like the priceless work of art, was stolen by the Nazis.

When, as a gesture of reparation, the German and Austrian governments offer to return valuable art works to their rightful Jewish owners, Maria sets out to regain the portrait of her beloved aunt with the help of attorney Randol Schoenberg, the son of Maria's friend. Now in her 80s, Maria wants to be reunited with the portrait of her beloved aunt, but restitution may prove to be impossible since the painting is considered an Austrian treasure.

Screenwriter Alex Kaye Campbell and director Simon Curtis paint a vivid cinematic portrait of their own as they allow the audience to get to know Adele and her young niece Maria in moving, well-positioned flashbacks which make it clear why the elder Maria (Mirren) is reluctant to go back to Austria personally to fight for her family treasures. Tatiana Maslany plays Maria as a young woman and Max Irons is her young husband, an opera singer The memories of their escape from Nazi occupied Austria still haunt Maria to the present day. As much as Maria once loved Austria, it is difficult for her to forgive and forget the past persecution.

Her flashback farewell with her parents is particularly heart-wrenching. She doesn't want to leave them, but they encourage her to escape and make a new life with her young husband in America. Her father's final words to her were "….we worked hard and did everything to belong. As you go I ask you only one thing, mein liebling (my darling)–remember us."

Mirren, as the elder Maria, is feisty, but also hesitant to return to her former homeland which treated her and her family and friends with such hatred and disregard. Reynolds is equally compelling as her young lawyer who learns to care for her, even when she gives him a hard time. Their fight becomes a personal crusade, not only for him and his client but for everyone who lost so much during the Holocaust.

Others in the cast include Katie Holmes as Schoenberg's wife, Jonathan Pryce and Daniel Bruehl as the young Austrian journalist who assists Schoenberg in his search for restitution and justice. The film is rated PG-13.

Pairing your party with pears is a sweet idea