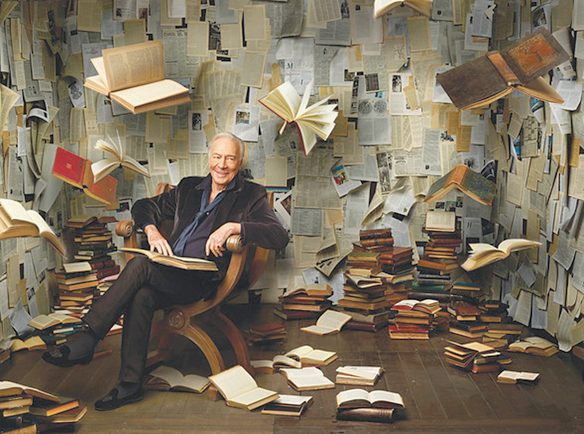 "A Word or Two,” currently at the Ahmanson Theatre through Feb. 9, was written, arranged and stars noted actor Christopher Plummer under the direction of Des McAnuff.  If you love books, the magic and power of words and elegant acting, this show should not to be missed.

The simple, yet very effective set by Robert Brill conjures up a never-ending staircase made from books.  For a lifelong reader like Plummer the set represents a stairway to his personal heaven where characters from countless printed pages have become life-long friends.

"A Word or Two,” currently at the Ahmanson Theatre through Feb. 9, was written, arranged and stars noted actor Christopher Plummer under the direction of Des McAnuff.  If you love books, the magic and power of words and elegant acting, this show should not to be missed.

The simple, yet very effective set by Robert Brill conjures up a never-ending staircase made from books.  For a lifelong reader like Plummer the set represents a stairway to his personal heaven where characters from countless printed pages have become life-long friends.

According to Plummer, “If there must be a theme (for “A Word or Two) let it be my eternal gratitude to a family who, from the moment I formed my first sentence, made me aware of the joy and magic of language, which after all, is our heritage to hold on to for dear life while we can.”

His choice of authors and books that fueled his insatiable love for literature range from A.A. Milne (Winnie the Pooh) , the Bible, Shakespeare, Shaw and Oscar Wilde to Barrie (Peter Pan), Rostand, Byron, Frost and humorist Ogden Nash.  He begins his performance by telling us that he was a shy, only child raised by his mother in Montreal, Canada.

While “a holy terror” at home, he suffered from crippling shyness so his early friends were the characters he learned to love while reading countless books in his room. These literary friends are brought to life throughout the evening by Plummer.

He doesn’t talk about his personal life a lot during the course of the evening,  so we don’t hear about playing Capt. von Trapp in the Oscar-winning “The Sound of Music” opposite Julie Andrews.  But he still can sing and breaks into song every once in awhile to prove a point.  He also briefly mentions his youthful Broadway days when he drank in New York’s White Horse Tavern with his pals, poet Dylan Thomas and Richard Burton.

Plummer, now 84, speaks French fluently, is as charming as ever and exudes more energy than people half his age.  He also is a man with a mission. Before he bids us ’adieu’ he urges us all to instill a love of literature in our children.  Read to them and share wonderful stories that will enrich their lives forever because there are more ways to communicate in today’s world than simple tweets and twitters.

What happens in Vegas can be lots of fun when four best friends from childhood, Billy, Paddy, Archie and Sam (Michael Douglas, Robert De Niro, Morgan Freeman and Kevin Kline) all get together to celebrate Douglas' upcoming marriage in Sin City to a gal half his age.

When Douglas, a confirmed bachelor, finally pops the question he calls his three dearest friends and invites them to his upcoming wedding. The foursome plan to party like it's1960 once again.  But they, like Las Vegas, have changed with the passing years.

If you haven't been to Vegas in a long, long time, this charming, romantic comedy will provide an eye-popping new look at Sin City.  The film is not only fun, its also a visual mini vacation. The Rat Pack and the Sands Hotel of the not-so-distant past are now just memories, replaced by dazzling new hotels like the Aria and countless shows by Cirque du Soleil.

For Morgan Freeman, getting there wasn't easy because his loving, over-protective son keeps a watchful eye on him, draining lots of the fun out of his existence. It isn't easy getting De Niro there either because unresolved issues have estranged him from his best friend. But somehow they all reunite in time to plan a bachelor party. Along the way, as they look for a good place to stay since the old hotels they once knew are no longer available, they run into Mary Steenburgen singing in a shabby hotel lounge off the strip.  (And she's actually doing her own singing.)

The star-studded cast is comprised of five Oscar winners–Michael Douglas (Best Actor, "Wall Street," 1987), Robert De Niro (Best Actor, "Raging Bull," 1980), Morgan Freeman (Best Supporting Actor, "Million Dollar Baby," 2004), Kevin Kline (Best Supporting Actor, "A Fish Called Wanda," 1988) and Mary Steenburgen (Best Supporting Actress, "Melvin and Howard," 1980).  The story centers on a group of 60 plus seniors who still want to have fun and live life to it's fullest as long as they can.  They also have a lot to share with the younger crowd they encounter while planning the big bachelor party bash for Douglas.

"Last Vegas," available Jan. 28 on Blu-ray Combo Pack, DVD and Digital comes with writer & director commentary and six behind-the-scenes featurettes that explore the film's storyline and character arc: "It's Going to be Legendary," "Four Legends" and "The Flatbush Four."  Three additional features on the supporting cast and filming in Las Vegas are available exclusively on the Blu-ray Combo pack: "Shooting in Sin City,"  "Ensemble Support" and "The Redfoo Party," which breaks down the pool party scene hosted by musician Redfoo of LMFAO.

"Last Vegas" has a running time of about 105 minutes and is rated PG-13 for sexual content and language.

THE LONG VIEW: Tip of the day: a gratuitous gesture...