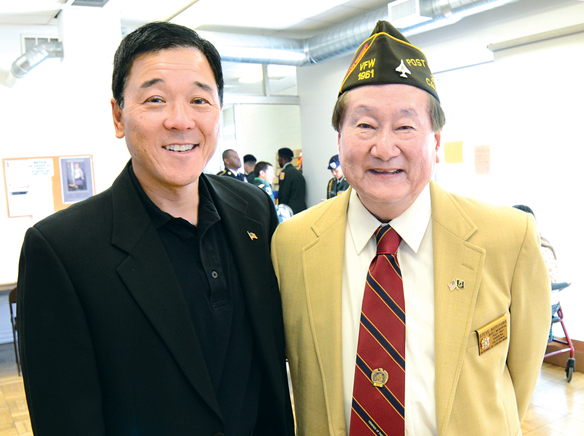 Following testimony in federal court last week, Sheriff’s candidate Paul Tanaka was besieged with criticism from rival candidates who urged him to bow out of the June 3 primary election.

Tanaka, who retired last year as the Sheriff Department undersheriff and is Gardena’s mayor, testified in court May 20 on behalf of Deputy James Sexton, one of seven officers on trial relating to alleged efforts to block an FBI probe of abuse of inmates in the county jail.

Following testimony in federal court last week, Sheriff’s candidate Paul Tanaka was besieged with criticism from rival candidates who urged him to bow out of the June 3 primary election.

Tanaka, who retired last year as the Sheriff Department undersheriff and is Gardena’s mayor, testified in court May 20 on behalf of Deputy James Sexton, one of seven officers on trial relating to alleged efforts to block an FBI probe of abuse of inmates in the county jail.

Tanaka’s acknowledgement that he is a subject in an ongoing federal investigation into obstruction of justice spurred several political opponents to ask that he withdraw from the Sheriff’s race, as reported by the Daily Breeze.

But Tanaka said he had no plans to drop out.

“I’ve run five elections before (dating back to his being elected to the Gardena City Council in 1999) and one thing I’ve learned is that when you put your name on the ballot, you have to be prepared for the attacks,” Tanaka said.

As the former second–in-command of the County’s Sheriff’s Department, Tanaka admitted through testimony that he knew about the department’s efforts to hide an FBI informant and inmate inside the County jail. He said he believed the Sheriff’s Department had a duty to protect the inmate while the department investigated the inmate’s claims that a deputy and federal agent helped him smuggle a cell phone and drugs inside the jail, the Breeze reported.

Sexton believes that his refusal to wear a wire to secretly record his father, who was going to be one of Sheriff Lee Baca’s top assistants, led prosecutors to charge him with obstruction of justice to help hide the inmate, according to the Breeze story.

Two years ago, Sexton testified before a grand jury that his booking the inmate under phony names to hide him was probably “breaking the law.”

Tanaka testified last week that hiding the inmate was not an order he gave, but that he also did not disagree with the decision. He added that his belief was to keep the informant safe during the investigation, the Breeze article said.

While Tanaka is not under federal investigation for brutality a the jail, his role in the matter has other candidates speaking out.

The Breeze quoted several Sheriff’s candidates who said Tanaka was in the wrong.

Candidate and Assistant Sheriff Todd Rogers told the Breeze that Tanaka’s claim that he was just following Baca’s orders was false.

Another candidate, Long Beach Police Chief Jim McDonnell said as a member of the Citizen’s Commission on Jail Violence, the group wanted Tanaka stripped of any power by Sheriff’s Department 18 months ago.

Retired Sheriff’s Cmdr. and candidate Bob Olmsted said Tanaka ignored his calls “to put an end to the abuse and excessive force in Men’s Central Jail.”

During a recent political forum of Sheriff’s candidates last week in Sherman Oaks, Tanaka said that two of his opponents spent their opening 2-minute statements “attacking me.”

“There were two-hundred people in the audience and I think (many) were sick of all the mudslinging,” Tanaka told the GVN.  He said that he harbors no ill will toward his opponents for the attacks, and that his overall qualities put him ahead of his opponents.

“I don’t take all this personal. I respect (my opponents) because they all have 25 to 35 years of service,” he said. “They put their lives on the line to protect the community, as a citizen, I respect that.

“But look at my 33-year, proven track record of reducing crime. Everywhere I’ve worked, I’ve been fiscally responsible. From managing the Sheriff Department’s nearly $3-billion dollar budget to helping bring the City of Gardena back from the brink of bankruptcy. Nobody in this race has (my) law enforcement, business and political leadership to run the largest Sheriff’s Department in the world.

Tanaka said that his opponents want him to drop his bid for Sheriff to improve their chances at the polls.

“They want me to drop out because they know that there’s a good chance I will be in the top two.”

His record will be weighed by the voter, and Tanaka said he is fine with letting them decide his fate.

“Voters are a lot smarted than you give them credit for,” Tanaka said. “They will sift through all of the finger pointing and name calling to get to the bare facts. And they will make their choice.”