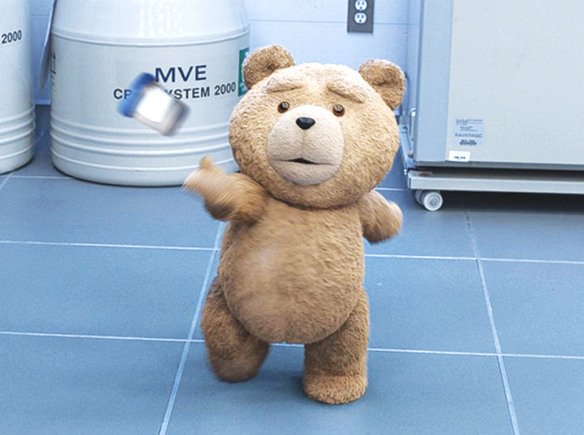 Seth MacFarlane’s humor is not for everyone. It can be crude, politically incorrect and vulgar. In “Ted 2,” about a raunchy Teddy bear named Ted (voiced by MacFarlane), it is all of the above in combination with some warm, tender moments and a razzle-dazzle  Busby Berkeley inspired dance sequence performed at Ted‘s elaborate wedding to a real live girl.

Seth MacFarlane’s humor is not for everyone. It can be crude, politically incorrect and vulgar. In “Ted 2,” about a raunchy Teddy bear named Ted (voiced by MacFarlane), it is all of the above in combination with some warm, tender moments and a razzle-dazzle  Busby Berkeley inspired dance sequence performed at Ted‘s elaborate wedding to a real live girl.

Eventually Ted’s marriage starts to come apart at the seams. At this point the very odd couple decides to adopt a baby, since anatomically speaking, Ted can’t be a dad because—well, you fill in the blanks.

The couple’s first choice for a sperm donor is Ted’s best friend John (Mark Wahlberg), but his clumsy attempt ends in a messy disaster at the sperm bank. The next step is a nighttime raid on the mansion of football star Tom Brady (in a cameo appearance), that also ends unsuccessfully, but provides lots of laughs particularly for the men and teen-aged boys in the audience.

There are quite a few star sightings throughout, including a funny bit by Liam Neeson who portrays a cautious cereal buyer at the convenience store where Ted used to work before he was fired. As a Teddy bear Ted is now legally considered  property after a court battle goes awry.

Now Ted can no longer earn a salary or be legally married. To reclaim Ted’s identity and personal rights John and Ted seek help from a young lawyer (Amanda Seyfried). This will be her very first case. Morgan Freeman, as the nation’s leading civil rights lawyer, is also consulted, but will this towering voice of authority join in their fight for equal rights for a Teddy bear?

If you are easily offended, stay away, but if you are open to an often funny comedy that is a guilty pleasure for movie snobs, you may find this raunchy comedy unbearably funny at times. Pardon the pun. From Universal Pictures, rated R for language, sexual references.

Now here are some DVDs for thrills, laughs and photography enthusiasts: "Run All Night," "While We're Young" and "The Salt of the Earth.
Liam Neeson is an actor for all seasons. He can make you laugh, as he does with his cameo appearance in "Ted 2," or keep you on the edge of your seat when he stars in action thrillers like Warner Bros. riveting "Run All Night," now available on DVD.

In the film Neeson is a Brooklyn mobster and prolific hit man named Jimmy Conlon, also known as The Gravedigger. Ed Harris co-stars as Shawn Maguire, a mob boss and Conlon's best friend.

Now 55, Conlon has seen better days. At this point in his life he is haunted by the sins of his past and by a dogged police detective (Vincent D'Onofrio) who has been just one step behind Jimmy for 30 years.

Special features include two featurettes—"Shoot All Night" and "Liam Neeson: Action All Night" and deleted scenes. From Warner Bros. rated R for strong violence, language including sexual references and some drug use.

"While We're Young" is a comedy for adults starring Ben Stiller and Naomi Watts as Josh and Cornelia. a middle-aged couple who befriend a hip young duo, Adam Driver and Amanda Seyfried. Soon the older filmmaker, Josh and his wife adapt a new life-style that includes hip-hop dance classes and mind-expanding parties.

But with each attempt at being forever young, they begin to appreciate the rewards of being able to grow older together. Charles Grodin plays Cornelia's father, a well- respected documentary filmmaker. Running time approximately 97 minutes. From Lionsgate, rated R for language.

"The Salt of the Earth," a film directed by Wim Wenders and Juliano Ribeiro Salgado, was nominated for an Independent Spirit Award and an Academy Award this year in the Best Documentary Feature category.

The film is a tribute to Sebastiao Salgado,who has traveled through the continents for the last 40 years in order to chronicle an ever changing humanity. He has witnessed some of the major events of our recent history, including international conflicts, starvation and exodus.

Now, in later life, he is photographing pristine territories of wild fauna, flora and grandiose landscapes. The elder Salgado's life and work are revealed to us by his son Juliano, who went with him during his last travels, and by Wim Wenders, also an avid photographer.

Special features include over 35 minutes of beautifully shot deleted scenes, and commentary by Wenders and Salgado's son, Juliano. The film has a running time of 110 minutes and is rated PG-13 for thematic material involving disturbing images of violence and human suffering and for nudity.