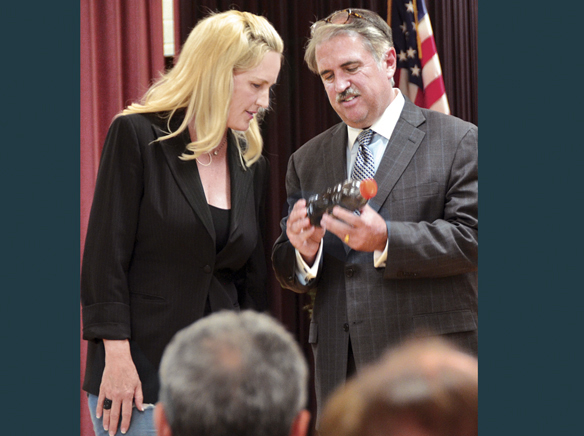 Brockovich in turn, listened as residents told their stories about the black, brown, yellow or foul-smelling water coming out of their faucets.

Brockovich in turn, listened as residents told their stories about the black, brown, yellow or foul-smelling water coming out of their faucets.

Along with a growing concern about the health effects of this water, some residents have additional worries of the effects this can have on their businesses.

“When I apply a sodium hydroxide or sodium peroxide color, I need to know what the reaction is,” Gardena homeowner and hair salon owner Patrice Simmons said. “I can’t afford lawsuits, when my clients start losing their hair. This is my livelihood.”

Along with the many residents with grievances about the water, Gardena Councilman Dan Medina was there also as a resident who has experienced the bad water.

“You’re paying for good water and you’re not getting good water,” Medina said.

Many raised questions which Brockovich, along with Robert Bowcock, a former water utility manager tried to answer during the two-hour community meeting.

According to a statement, Golden State Water said the company “takes water quality seriously and has been working diligently to ensure that the water provided to Gardena customers meets expectations.”

The most obvious concern by residents was GSWC’s claim that the water did not pose health risks, and suggested water quality was consistent with corroding pipes.

While GSWC has continued funneling in the water without fixing the problem, officials believe the issue is caused by manganese and other chemicals. Bowcock said these chemical sediments are not on “the list of banned substances,” according to GSWC, so are not regulated.

“If it’s not on the list, (GSWC says the water is) perfectly OK,” Bowcock said. “But this water is not safe to drink.”

Bowcock said he suspects the dirty water is caused by subpar maintenance of plumbing and a chemical reaction where water from different sources blend together.

Since the complaints earlier this year received national attention from a YouTube video of Gardena’s black water, Golden State has been flushing out pipes in response. The water company said it was an isolated problem, but Gardena neighbors claim the opposite.

Bowcock said that after a couple months of looking into the issue, he has met with U.S Rep. Maxine Waters. Bowcock has suggested a two-track approach, which includes pursuing regulatory relief under water quality laws, and filing class-action claims for damages.

Brockovich, who rose to fame for her environmental battle with PG&E and had a Hollywood movie made in her name (starring Julia Roberts), said the water situation in Gardena is deplorable.

“We have a crisis where you now are really being delivered Third World water,” Brockovich said in response to the city’s smelly water.

While resolutions and efforts are underway, some residents admitted the process won’t be a quick fix.

“So far what seems to be happening is positive,” Gardena resident Manuel Montano said. “I’ve been living in Gardena for 15 years and I’m a homeowner. I have noticed a lot of difference in the water especially over the last few years. Hopefully there’s going to be (a positive) change. We’re paying for water that’s supposed to be good enough to drink, but it’s not.”

Even if GSWC resolves the problem, Montano and others worry about future health issues from decades of exposure to unsafe water.