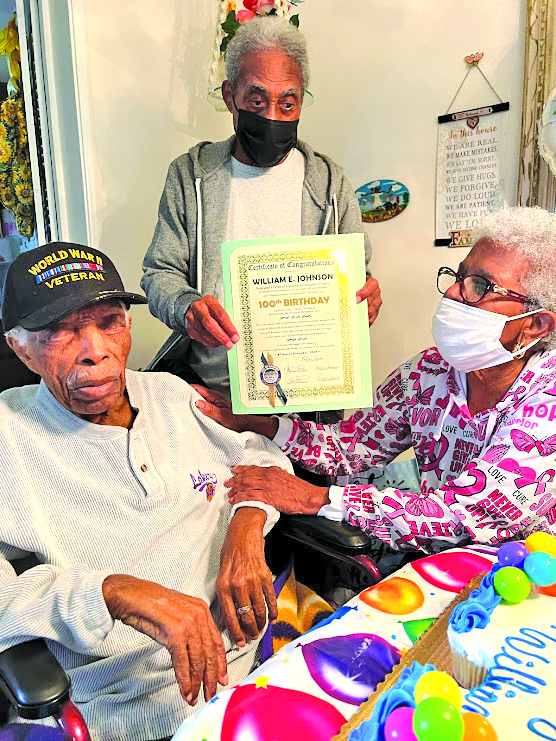 Centenarians, those who live to be 100 or older have numbered around 82,000, which is less than one percent of the U.S. population, which makes it a very big deal when one of them can be found in Gardena. William Johnson turned 100 years old on Saturday, Dec. 4 and has quite a lot to show for it. For one thing, he and his wife Rose have made Gardena their home for more than 50 years, where they raised three boys: Johnathan, Michael, and Dell, all three of whom attended Purche Avenue Elementary and Gardena High School. Johnson’s son Jonathan, 62, said his father, who has been a fixture in the Gardena community for the past half century, remembers when strawberry fields outnumbered the roads in Gardena. He said his father also remembers his time as a member of the U.S. Navy during World War II, when he served and fought in the Asia Pacific Theater and at Pearl Harbor from 1943 until he was honorably discharged on Dec. 31, 1945. He distinguished himself by earning the American Theater Ribbon, the Asiatic Pacific Ribbon, and the Victory Medal for his military service. In fact, he made such an impression as a member of the Navy that he received a personal letter from U.S. President Harry Truman, stating: To you who answered the call of your country and served in its armed forces to bring about the total defeat of the enemy, I extend the heartfelt thanks of a grateful nation. As one of the nation’s finest, you undertook the most severe task one can be called upon to perform because you demonstrated the force, fortitude, resourcefulness and calm judgment necessary to carry out that task. We now look to you for leadership and example in further exalting our country in peace. “At the time they were doing their duty to protect the USA from an aggression,” Johnathan said. “His attitude was that they were going to do their best to make sure America was safe. This is what made me join the Air Force. He said other countries have a tendency to rape and pillage when they take over a country so it’s our duty to protect our women and children. That stuck with me.” After the war, William Johnson went back to his home state of New York, but quickly did an about face and headed west to California after discovering that his beloved Dodgers were moving the team from Brooklyn to Los Angeles. It was in Los Angeles where he began his post-war life, raising his family and working as a janitor at the Los Angeles Board of Education for the next 40 years. When not working, Johnson loved taking his family to Dodger games, especially on the special days such as Bat Day and Helmet Day. He also enjoyed Lakers games and is proud of the 26×40- inch portrait of himself and his wife dressed in their Lakers gear. Jonathan says his father doesn’t spend much time watching the teams these days mostly due to the doctor telling his dad to stop watching the games as they made him very worked up and anxious. Jonathan said that his dad is a man of faith who ran his household with all of the efficiency of a military base, especially when it came to his kids. Johnson made his kids go to church every Sunday rain or shine at Hollypark United Methodist Church. He also made sure they completed all chores before being allowed to go to the park to play basketball. “On any given weekend, us kids were up a 5 a.m. to gather the rugs and towels and clothes and take them to the laundromat on 139th and Rosecrans,” Johnson said. “We would then go home and fold and iron the clothes. Then we would clean the bathrooms, wash and wax the cars and other chores before they could go play. And we couldn’t get out of bed without making our beds with the hospital corners.” One thing that Johnathan said he father taught him was to follow the rules and make sure he was doing the right thing at all times. “He once said: ‘A lot of people try to buck the system and you should never try to buck the system,’ Johnathan said. ‘You should work within the system and do what you’re supposed to do and that way you never have to look over your shoulder and everything will be alright.’” Jonathan heeded his father’s words of wisdom which is what helped him achieve his own measure of success in the Air Force and afterward as the 1995 commissioner of the Juvenile Justice Center of Gardena and the president of Hollypark United Methodist Youth Fellowship. Currently, William Johnson is bedridden and no longer active in the community, but he is still an active member of his family and still has much he can still teach his children, especially about longevity. Jonathan asked his dad about his secret to a long life. His dad told him one word: laughter. “My father was a character, no matter who you were when you met him, you were not a stranger,” Jonathan said. “He said laughter is what helped him live so long.” One other thing that helped in Johnson’s longevity was his daily walk with his wife. Every day from 1982 to 2005, the couple would walk from their home on 139th Street to Rowley Park and back. Jonathan said this not only strengthened his health but also made him a well-known figure in the neighborhood thanks to his sunny disposition and quickwitted rhyme as an answer to any question asked of him. “I call my father the original rapper from New York because everything he said was a rhyme applicable to the situation. Someone would ask him: How are you? And he would say: ‘I’m as fine as wine in the summertime.’” And like fine wine, William Johnson is aging nicely 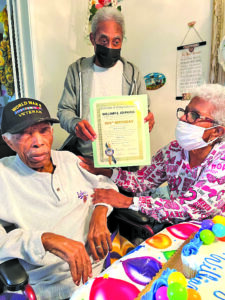