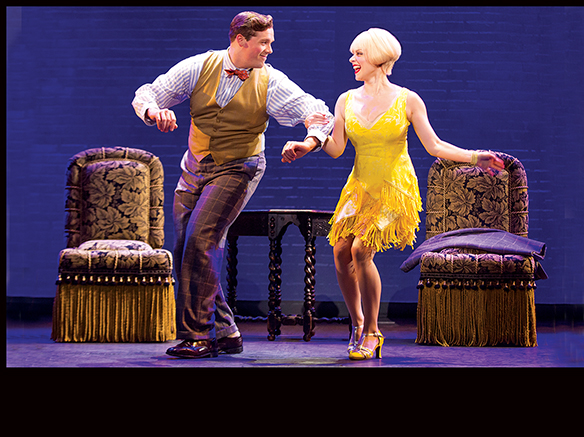 “Bullets Over Broadway: The Musical,” written by Woody Allen, is based on his screenplay of the same name, co-written with Douglas McGrath. The original direction and choreography for the musical are by Susan Stroman, a five-time Tony Award winner who also gave dance pizazz to Mel Brooks’ smash hit Broadway musical “The Producers.”

“Bullets Over Broadway: The Musical,” written by Woody Allen, is based on his screenplay of the same name, co-written with Douglas McGrath. The original direction and choreography for the musical are by Susan Stroman, a five-time Tony Award winner who also gave dance pizazz to Mel Brooks’ smash hit Broadway musical “The Producers.”

In Woody’s musical, the storyline revolves around the making of a 1920s Broadway show with a ‘lotta’ financial help from the mob. The young, but very pretentious playwright, David Shayne (Michael Williams) is willing to do almost anything to get his play produced on Broadway. Things look up when his agent Julian Mars (Rick Grossman) links him up with Nick (Michael Corvino), a mob boss intent on making his bimbo girlfriend a star on the Great White Way.

There is just one big problem. Olive (Jemma Jane) is a total ditz, with no talent whatsoever and a voice that could stop a clock, as well as a Broadway show. Horrified at the thought of her in his play, David flatly refuses, but later relents because he wants his show to go on. And maybe, he hopes, Olive will improve. No such luck.

Since Olive is a flirt, Nick sends his chief hitman Cheech (Jeff Brooks) to every rehearsal to ensure that Olive doesn’t misbehave. While the entire cast is uniformly good, it is Brooks (Gaston in the Disney National Tour of “Beauty and the Beast”) who steals the show.

On opening night his big song and dance number with fellow gangsters stopped the show.

Act I opens with a bang, literally, as Cheech comes out with a machine gun and blasts away, but after that the expository opening scenes slow down the momentum as we are introduced to the various characters.

The “Tiger Rag” dance sequence is cute and clever, but then “Gee Baby, Ain’t I Good to You,” sung by Olive and Nick, goes on too long. Things perk up again when we meet the other actors in the play. Bradley Allan Zarr is a hoot as Warner Purcell, the leading man who loves to eat.

As time goes by, thanks to a variety of ‘fat suits,’ Zarr’s waistline grows by leaps and bounds, but despite his ever increasing girth, he is always light on his feet. The very elegant and beautiful Emma Stratton plays Helen Sinclair, the role that garnered Diane Wiest an Oscar. Helen also flirts with David, using the memorable line from the movie — “Don’t speak” often. She leads him on in the hope of padding her part.

Hannah Rose Deflumeri also gives a show stopping performance as David’s long-suffering girlfriend who hopes to marry him one of these days. And in Act II, when she sings “I’ve Found a New Baby,” she, like Brooks, receives thunderous applause.

While the story is fluffy and fun on many levels, it also poses a dark question as well. As the show goes on, Cheech discovers he has a natural gift for play writing, plotting and dialogue. At one point he asks David if he ever reads magazines to see how real people talk.

Soon, rather than being protective of Olive, who is a terrible actress, Cheech begins to think that the show must go on without her. But should he bump her off to make sure that the play is a hit?

Unlike Mel Brook’s “The Producers, ” this show does not have an original musical score. Instead Woody Allen uses songs from the era like “Up A Lazy River,” “’Tain’t Nobody’s Bizness If I Do,”  “Let’s Misbehave,” “Runnin’ Wild,” and “There’ll  Be Some Changes Made” (referring to script rewrites). The final song is “Yes, We’ve Got No Bananas,” which ties in with the kind of naughty “The Hot Dog Song,” sung in Act I by Olive.

“Bullets Over Broadway” is frothy fun, with a few dark moments and is at its best in Act II with not one, but two show-stopping numbers.

“Bullets Over Broadway,” at the Hollywood Pantages Theatre, 6233 Hollywood Blvd., L.A., through Jan. 24 only. For tickets: online at www.HollywoodPantages.comor www.Ticketmaster.com. By phone: 1-800-982-2787 or in person at the box office.

“Irrational Man,” written and directed by Woody Allen, is now available on Blu-ray and DVD as of Jan. 12. The film, a dark comedy-drama starring Joaquin Phoenix, Emma Stone, Jamie Blackley and Parker Posey, is similar in tone to Allen’s “Crimes and Misdemeanors,” since both films pose interesting philosophical questions about good and evil.

Phoenix (“Her”) plays Abe Lucas, a tormented philosophy professor who has come to a small college town to teach. He feels burned out. At this point his life feels meaningless. Despite his depression, he becomes involved with two local women.

One is Rita Richards (Parker Posey), a lonely professor who wants him to rescue her from her unhappy marriage. He is also drawn to Jill Pollard (Emma Stone, “Birdman”) who is his best student. Soon she also becomes his best friend.

Unfortunately for Jill, their relationship causes friction between her and her boyfriend Roy (James Blackley). Jill loves Roy, but is attracted by Abe’s tortured, artistic personality, coupled with his exotic past. By pure chance, everything changes for Abe and Jill when they happen to overhear a stranger’s conversation.

At this point Abe makes a dramatic and profound choice, which reinvigorates his enthusiasm for living once again. But his decision also sets off a series of events that will profoundly affect the lives of both Jill and Rita forever.

Special features on both the Blu-ray and DVD include “On the Red Carpet: Los Angeles Film Premiere” and a Photo Gallery. The film has a running time of 95 minutes and is rated R for some language and sexual content. From Sony Pictures Home Entertainment.

THE LONG VIEW: Grad Day for younger son is a...