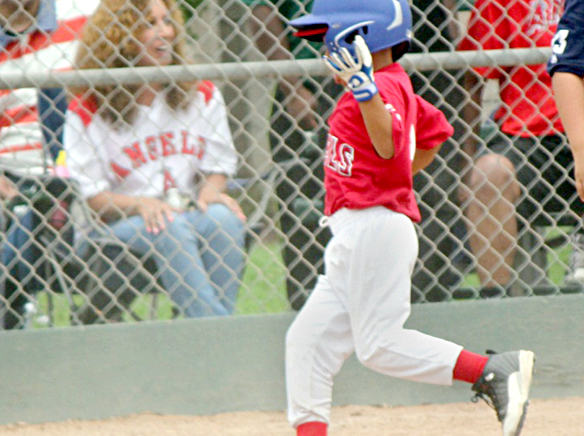 Angels rally to defeat Braves for Bantam crown; other sports for July 24

The Rowley Park Angels got off to a slow start then used two big innings to rally past the Mas  Fukai Park Braves, 8-4, for the Gardena Parks and Recreation Bantam (ages 8-9) Division last Saturday at Rowley Park.

Down 3-0 early, the Angels came back with three runs in the bottom of the fourth inning to tie the game, then let loose for five in the fifth to grab an 8-3 lead.

Angels rally to defeat Braves for Bantam crown; other sports for July 24

The Rowley Park Angels got off to a slow start then used two big innings to rally past the Mas  Fukai Park Braves, 8-4, for the Gardena Parks and Recreation Bantam (ages 8-9) Division last Saturday at Rowley Park.

Down 3-0 early, the Angels came back with three runs in the bottom of the fourth inning to tie the game, then let loose for five in the fifth to grab an 8-3 lead.

The Braves got one run back in the bottom of the fifth but relief pitcher Anthony Ramirez was able to stop their rally attempt as the Angels captured their third consecutive championship.

Chris Smith (GVN Athlete of the Week) sparked the Angels’ offense with two hits and three runs batted in.

The Angels began the playoffs by edging the Diamondbacks, 8-7, then rolled over the Pirates, 12-4.

The Braves started the playoffs by downing the Athletics, then slipped past the Twins, 6-5, in the semifinals on July 15.

“We played good baseball,” Braves manager Joe Aguilar said. “We had a good season. I am proud of our boys. We’re hoping to win it next year.”

North Torrance is unable to hold off Lennox

The North Torrance Junior Little League All-Star baseball team was unable to hold on to an early four-run lead in a 7-6 loss to Lennox in an error-plagued game on July 14 at North Venice Little League Field.

Taking advantage of Lennox errors, North took a quick 4-0 lead in the bottom of the first inning, but starting pitcher Tyler Baskett gave up two two-run home runs and North committed a few miscues that tied the game for Lennox.

North regained the lead but Lennox bounced back to win in the end.

“It was a good back-and-forth game,” North manager Andrew Mongarro said. “A couple of errors hurt us and we didn’t get the hits from the heart of our lineup.”

Adrian Morales had a home run and had a few outstanding defensive plays for Lennox.

Lennox went on to give a powerful Manhattan Beach team a scare before losing 6-4 in eight innings in the championship game on July 15. Manhattan Beach has already won its first two games in the Southern California (California Division 3) Tournament last weekend in Tehachapi.

It’s been nearly three months since Michael D’Antoni resigned abruptly as the head coach for the Los Angeles Lakers.

Since then, there has been no naming of the new head coach but they are leaning toward hiring the experienced Byron Scott, who headed the New Jersey (now Brooklyn) Nets, New Orleans Hornets (now Pelicans) and Cleveland Cavaliers.

Scott had early success with the Nets who made the National Basketball League championship series in the 2001-02 and 2002-03 seasons, losing to the Lakers and the San Antonio Spurs, in order. He carries a combined record of 416 wins and 521 losses, including a miserable 64-166 mark with the Cavaliers. He started heading the Cavaliers right when they were coming off the loss of La Bron James who went to the Miami Heat as a free agent and they suffered losing seasons that also included a co-NBA  record (with this past season’s Philadelphia 76’ers) 26 consecutive losses in the 2010-11 season.

James returned to the Cavaliers as a free agent last week.

Scott is a former Inglewood Morningside High and Arizona State University standout and played for the Lakers during the 1980’s up until the mid 1990’s.

However, they are continuing to interview other candidates for the third time.

The Lakers needed to hire a new coach by before the NBA draft from a month ago. Come on Busses! Hire one now!

Dunlap was Serra’s A.D. for the past eight years and turned the school into an overall sports power.

The Cavaliers won state Division III boys’ basketball in 2010. Their girls won the state championship in 2013.

Serra, under head coach Lori Thompson Smith who retired after the 2013 season, captured state track and field for the girls in 2012 and the boys in 2013.

The Cavaliers also won their first CIF-Southern Section baseball crown, winning the Division III title over Manhattan Beach Mira Costa, 8-1, in 2013 at Dodger Stadium. That Serra squad was led by Dominic Smith, who was a first round draft choice with the New York Mets. A year later, Marcus Wilson was taken in the second round by the Arizona Diamondbacks. Wilson had a home run against Mira Costa in the 2013 CIF-SS championship.

Serra was named as Cal Prep’s High School of the Year in the 2009-10 year, which saw the Cavaliers become the first school to capture state championships in football and boys’ basketball.

Serra was the only school to accomplish the feat of winning what was considered the top two major sports until Chaminade, which stunned the host Cavaliers for the CIF-Southern Section Western Division football championship last fall, won Division II in football and Division III in boys’ basketball. On top of that the Eagles captured the state Division II crown in girls’ basketball.

Dunlap will work full time with the MBA program at University of Southern California.

A new athletic director is expected to be picked soon. Sources are that Serra head boys’ basketball coach Dwan Hurt appears to be one of the top candidates.

Summer Baseball: Serra High’s baseball team is not playing in any summer league games but its players are still being heavily involved on prestigious teams.

Stars Morgan Lomax and Mateo Bramblia, who are returning as seniors this fall, are playing in on a national junior team series. Lomax, along with ex-Serra player Duncan McKinnon (who transferred to Redondo High last year) will also be playing in the Area Code Tournament at Blair Field in Long Beach from Aug. 4-9.

McKinnon, meanwhile, helped Redondo advance to the CIF-Southern Section Division III semifinals where it fell to eventual champion La Puente Bishop Amat, 3-1, on June 3 at Bishop Amat. He recently led the Sea Hawks to a first place standing in the South Bay Summer League as they hope to enter the playoffs as the top seed that begins this week.

The semifinal appearance for Redondo, which tied with Rolling Hills Estates Peninsula for second place in the Bay League (behind champion West Torrance), was the furthest it has gone since 1988. In that year, the Sea Hawks were led by Scott Davison, who went on to play Major League Baseball with the Seattle Mariners and now owns his House of Hardball Baseball Academy in Lomita.

Gardena played some summer league games in hope of improvement for next season. The Panthers were mostly very young last season and hope to improve enough to contend in the Marine League for 2015.