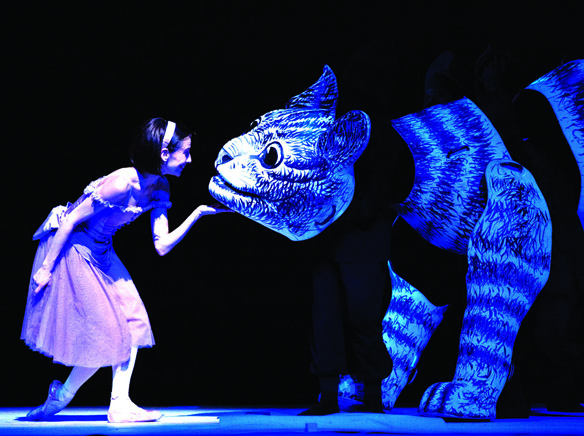 Attention lovers of fine ballet and whimsy! The 10th anniversary season of “Glorya Kaufman Presents Dance at the Music Center” begins with the U.S. debut of The National Ballet of Canada’s “Alice’s Adventures in Wonderland,” choreographed by Christopher Wheeldon. Add a sweeping musical score by Joby Talbot and wildly imaginative sets and costumes by Bob Crowley that makes use of puppetry, projections and masks, and Wonderland really comes to life.

Attention lovers of fine ballet and whimsy! The 10th anniversary season of “Glorya Kaufman Presents Dance at the Music Center” begins with the U.S. debut of The National Ballet of Canada’s “Alice’s Adventures in Wonderland,” choreographed by Christopher Wheeldon. Add a sweeping musical score by Joby Talbot and wildly imaginative sets and costumes by Bob Crowley that makes use of puppetry, projections and masks, and Wonderland really comes to life.

In the ballet Alice encounters a diverse cast of characters ranging from the Queen of Hearts to dancing playing cards, a sinuous caterpillar and a tap-dancing Mad Hatter.

There are dark undercurrents as well like a nightmarish kitchen, an eerily disembodied Cheshire cat and that famous tea party sequence.  Adults and children should find the results enchanting.

On Oct. 2, Warner Bros. Home Entertainment released “Dark Shadows” in time for Halloween viewing and enjoyment.  Yes, October is the perfect month to set vampires, werewolves and all sorts of dark, shadowy creature loose with stories that will hopefully scare the daylights out of you.

“Dark Shadows,” directed by Tim Burton, stars Johnny Depp as Barnabas Collins, a vampire awakened from several centuries of cursed slumber.  He lay buried in a coffin since 1772, but is released in 1972 when a crew of workers unearth his casket and open it.  This turns out to be a big mistake.

To his great surprise Barnabas discovers that the flourishing fishing business of his father, dating back to the 1700s, is nearly ruined and his descendents are a sorry lot with a live-in-shrink (Helena Bonham Carter) on hand to try and keep them centered.

The family matriarch, Elizabeth Collins Stoddard (Michele Pfeiffer), is the one relative he feels he can trust with his dark secret past, but it turns out his dysfunctional family members have dark secrets of their own.

The screenplay by Seth Grahame-Smith is based on the hit black and white television series, “Dark Shadows,” created by Dan Curtis.  I never saw the series, but fans of the original should keep their eyes open because the original Barnabas Collins and others from the TV cast make a cameo appearance in the film as guests who come to the refurbished Collins mansion for an elaborate ball.

They are dressed in party clothes and come to the front door.  They are also seen on the dance floor. Their on-screen-tribute is brief, so be prepared.

While the storyline deals with an undead Collins family member, Barnabas Collins, and the curse placed on him back in the late 1700s by a bewitching lover,  a witch named Angelique Bouchard (Eva Green), the macabre storyline is also quite amusing.  Much of the humor derives from the contrast in time.

Everything was prim and proper when Barnabas was buried alive in 1772, but now that he’s back among the living he discovers life in 1972 is totally different from the world he once knew.  He’s also distressed to see that his grand estate has fallen into ruin and his current family is a mess.

Being an honorable fellow, even though he is a vampire, Barnabas is determined to revitalize his family and their mansion to their past glory days.  Unfortunately Barnabas is still haunted by the reincarnation of his former jilted lover, Angelique, who is now Collinsport’s leading citizen.  In her current existence she is known as Angie and she bears a striking resemblance to his old nemesis.

It seems that no one really dies, they just return century after century in a new body, but to Angie’s surprise she still has the hots for the newly resurrected Barnabas.  In one love scene, as she tries to win him back in this life, they literally bounce off the walls.

The tryst is more comical than sexy and there are complications.  It turns out Barnabas doesn’t want to rekindle his past lust for Angie because young David Collins’ new nanny, Victoria Winters (Bella Heathcote) is mysteriously the mirror image of Barnabas’ one true love, Josette.  Uh, oh!

The “Dark Shadows” Blu-ray Combo Pack contains many special features with nine behind-the film Focus Points.  They range from “Becoming Barnabas” as Johnny Depp talks about transforming himself into this infamous, undead cult character to a segment entitled “Vampires, Witches and Werewolves, Oh My!” which uncovers the method behind Tim Burton’s madness as he twists and tweaks his favorite classic movie monsters for the gothic universe of “Dark Shadows.”  Another fun feature is “Reliving A Decade.”

It examines the 1970s from groovy bell-bottoms to classic rock ‘n roll as Barnabas finds himself in a new century so unlike the one he left behind. Warner Bros., Rated PG-13.

“Dark Shadows’ is available for download from online digital retailers including i Tunes, Xbox, PlayStation, Amazon, Vudu and Cinema Now.  It is also available digitally in High Definition (HD) VOD and Standard Definition (SD) VOD from cable and satellite providers and on select gaming consoles. The Blu-ray Combo Pack SRP is $35.99, DVD SRP $28.98.

Other Burton DVD titles for Halloween

“Edward Scissorhands” stars Johnny Depp as a special boy who was created and pieced together from spare parts by a clever magician (Vincent Price). The magician in the story dies before he can craft real hands for the shy, strange young Edward.  (This was also the last film Vincent Price made before his death.).

Depp also stars in the macabre Tim Burton version of Steven Sondheim’s dark musical “Sweeny Todd” about the Demon Barber of Fleet Street. The ill-fated London barber becomes deranged when he is wrongfully imprisoned for years for a crime he did not commit.

Eventually he escapes and returns to London where he joins forces with Helena Bonham Carter, a baker who is smitten with him.  As he slashes the throats of those who come to him for a shave, she turns the corpses into  delicious meat pies.

Another Tim Burton film on DVD is the whimsical “Nightmare Before Christmas.” This clever fairytale is about Jack, the King of Halloween, who, when he discovers the wonders of Christmas, tries to combine the two holidays into one.

Very clever and the stop action animation is amazing.  Fun for all ages from Burton and Disney.

These are all oldies, but Halloween goodies.

Just for fun: what mayonnaise reveals about you