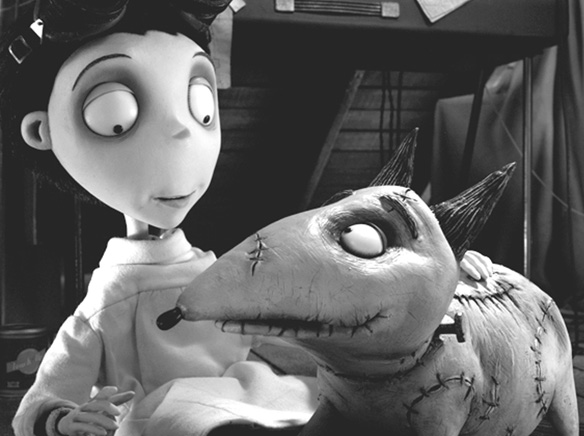 After their living room screening, Victor’s supportive parents applaud and Sparky wags his tail a lot.

After their living room screening, Victor’s supportive parents applaud and Sparky wags his tail a lot.

Victor’s father, Mr. Frankenstein, is a social, friendly travel agent who is proud of Victor’s abilities, but worries that Victor has no close friendships other than Sparky.  So dad encourages his bookish, film-making son to join the school’s baseball team.  Unfortunately this well-intentioned idea results in a tragic accident as hyper-active Sparky dashes out into the street to retrieve a baseball.

Before Victor and his parents can catch the little dog Sparky is hit by a car.

Victor’s mom tries to console her son, but it is his science teacher, Mr. Rzykruski, (voiced by Martin Landau in a thick Eastern European accent suitable for Transylvania) who gives Victor the idea that anything is possible with scientific application. When the teacher reanimates a dead frog via electric shock, Victor is struck by the possibility that he might be able to bring Sparky back to life by using the power of natural electricity, in this case lightening.

And his theory actually works.

As I watched the film, I felt that Victor had to be a lot like Tim Burton was at the same age and I was right.  According to Burton, “I loved watching classic horror films when I was a child, especially ‘Frankenstein’ and the reason I originally wanted to make ‘Frankenweenie’ was based on my love for horror movies and my childhood relationship with a certain dog that I had.  It’s a special relationship and it’s very emotional…so that in combination with the Frankenstein story, just seemed to be a very powerful  and very personal kind of remembrance.”

Burton had always envisioned the story as a full-length, stop-motion animated film, but back in 1984, due to budget constraints, he instead directed it as a live-action short for Disney.

Charlie Tahan (“Charlie St. Cloud”) was chosen to play Victor over hundreds of hopefuls.  As executive producer Don Hahn says, “Charlie brings a great sense of emotion to the story… and he give the audience a character they can really root for.”

Atticus Shaffer (Brick on ABC’s comedy hit “The Middle”)  voices Edgar “E.” Gore, a creepy classmate who wants Victor to be his partner for the science project.  Robert Capron (Rowley in “Diary of a Wimpy Kid”) is Bob who is also in Victor’s science class.  Conchata Ferrell (Berta on CBS-TV’s “Two and a half Men”) voices Bob’s mom. Winona Ryder (“Edward Scissorhands” and “Beetlejuice”) is Elsa Van Helsing, the girl next door who empathizes totally with Victor when he loses his beloved dog because she loves her perfectly groomed black poodle, Persephone that also has an electrifying attraction to Sparky.

The monsters in the story include a Godzilla-like reanimated turtle that belonged to Toshiaki, who along with other boys in the class,  decides to steal Victor’s formula in order to win the coveted Science Trophy.

Nassor also uses the information to bring back his pet named Colossus. “Were-Rat” is a deceased rodent found in a trash bin by creepy Edgar E. Gore, who apparently doesn’t have a dead pet of his own.

And then there are the sea monkeys.  I thought of my sister Robin on this one because as a kid she spent a bundle of her baby-sitting money on buying all of her sisters these wonderful Sea Monkeys that she read about in a magazine ad.

Sadly they didn’t spring to life like they do in “Frankenweenie.”

Last, but not least, there’s Vampire cat.  (Obviously Burton doesn’t love cats like he does dogs, but the cat adds a lot of humor throughout the film.)

Since the movie is based on the death of a beloved dog and the reanimation of dead pets from the pet cemetery, I wondered how young kids would react.  As I watched the youngsters after the screening, along with Alice Maltin, we talked about how we might have felt as kids. But, as Alice pointed out, we were a different generation.

After my chat with Alice I decided to talk with one of the children at the screening, and chose a cute young boy, about 8, who was holding a Sparky dog purchased at the El Capitan Disney Store.  I asked him if the movie scared him. He replied, “No, but I was sad.”  Then I asked him what he liked best about the movie. As he hugged his Sparky dog, he smiled and said:  “I liked it best that the dog didn’t die.”

Burton has directed many films from the “The Nightmare Before Christmas,”  “Mars Attacks!” and his most recent “Dark Shadows.”  All are tinged with dark humor, but for me, I think my favorites are “Edward Scissorhands” and this dark and very endearing boy and dog story—”Frankenweenie.”  I am confident that it will be nominated for an Oscar, and I have a hunch, Igor, that “Frankenweenie” just might win.  Disney, rated PG.

‘The Book Thief—life, family and the power of the written word