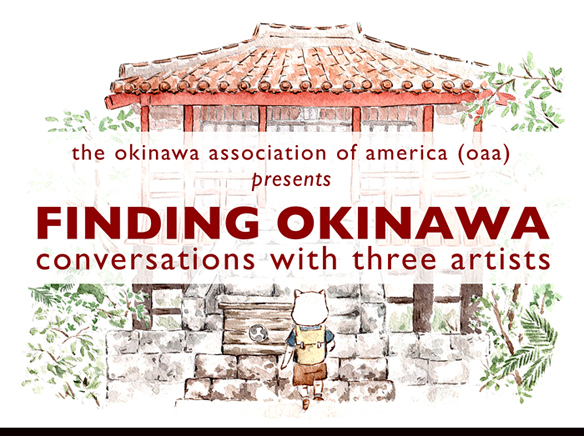 In addition to talking about their work, they will touch upon their experiences as third- and fourth-generation Okinawans and how their identity inspired certain projects.

The event’s title, “Finding Okinawa,” reflects the journey that many Okinawan descendants have in the search for their familial roots and cultural identity. The event also aims to explore the power of art and the importance of ethnic representation in creative fields.

Doors will open at 11:30 a.m. for a mini exhibit featuring the illustrations of Flor Kaneshiro.

Due to limited space, reservation is required by Friday, Jan. 25. Admission is $5 for the general public, free for current OAA members and children ages 10 and under (donations are appreciated). The OAA Center is located at 16500 S. Western Ave. (the event will take place in the Yamauchi Building). Limited on-site and streetside parking available. Register online (bit.ly/findingokinawa2019) or through the OAA office (oaamensore@gmail.com, 310-532-1929; weekdays, 10 a.m. to 4 p.m.).

Jon Shirota is a renowned author and playwright from Maui, Hawai‘i. His debut novel, “Lucky Come Hawaii” (1965), became a milestone as the first best-selling novel by an Asian American author from Hawai‘i. Shirota’s works are unique because of their complex representations of Okinawan immigrants and their descendants: “Lucky Come Hawaii” and “Leilani’s Hibiscus” center on Okinawan immigrant families in Hawai‘i while “Voices from Okinawa” follows a mixed-race Okinawan American who, as an English teacher in Okinawa, learns about his ancestral homeland’s difficult relationship with the U.S. military presence. The University of Hawai‘i Press published a landmark anthology, “Voices from Okinawa,” in 2009, compiling the three aforementioned plays in addition to essays and memoirs by other notable Okinawan authors. At 91 years old, Shirota continues to give presentations about his literary works in Hawai‘i and the mainland U.S.

Gena Hamamoto is a filmmaker and media arts educator. Her credits range from mainstream productions like “GLOW” and “iZombie” to notable independent documentaries such as “No Más Bebés” and Asian American festival favorites like “The Crumbles.” As an educator, the California-born yonsei (fourth generation) has worked with incarcerated youth, immigrant communities, and senior citizens. She also worked as assistant director for the UCLA Center for Ethno Communications program. A short trip to Okinawa sparked an interest in the Okinawan side of her family and she decided to choose World War II’s Battle of Okinawa as the focus for her UCLA thesis project. Titled “Typhoon of Steel,” the 19-minute documentary recalls the experiences of Frank Seiyu Higashi and Takejiro Higa, two nisei (second generation) who served as U.S. military linguists during the devastating campaign in their parents’ home islands.

Flor Kaneshiro is a sansei (third generation) illustrator from Argentina whose artwork has been exhibited and published locally and in China, Okinawa, Spain, and the United States. In 2016, she had the opportunity to study traditional Ryūkyūan lacquerware at the Okinawa Prefecture University of Arts (Geidai) through the Okinawa Prefecture International Student Program (commonly called the “kempi scholarship”). One year living in her grandparents’ homeland also inspired her illustration work, resulting in a number of beautiful watercolor paintings of Okinawan sacred sites, nature, and cultural elements, as well as a series based on the horrors of the Battle of Okinawa. In the past year, she illustrated three books including a cookbook from Silvia Morizono, a pioneering restaurateur who popularized Japanese cuisine in Argentina, and began working on a project for the Asociación Peruano Japonesa (Japanese Peruvian Association). This will be her first time visiting the United States.

The Okinawa Association of America, Inc. (OAA) is a 501(c)(3) non-profit organization that is dedicated to preserving and promoting Okinawan culture. Formed by Okinawan immigrants (issei) over a century ago, the OAA has grown into a multi-generational organization that hosts numerous events throughout the year including cultural lectures, performances, social gatherings, and senior-focused activities. 2019 marks the organization’s 110th anniversary. For updates about special anniversary events including a concert by the renowned Okinawan band, Begin (ビギン), please visit oaamensore.org or facebook.com/oaamensore.