The Cavaliers closed out their day’s performance with a win in the 4×400 relay. Runners were Okoh, freshman Maya Rush, Herron and Frost. Bonita of La Verne, the Division II champion, had the meet’s best time in 3:44.92. Herron placed second in the 400 55.79, just .08 of a second behind champion Sydney Bentley of Playa del Rey St. Bernard (55.71).

Also excelling was senior Erin Brown who captured the discus in a Serra High record distance of 125 feet, two inches.

In the end, the Cavaliers tallied 77 points to 48 for runner-up John Muir High from Pasadena. Finishing third was Westlake Village Oaks Christian with 45.

Page, however, was one of the favorites to win the 400 but pulled out.

As a team, Serra finished 16th with 12 points. Winning the team crown was Oaks Christian with 81 points to 68 for Cerritos Valley Christian and 37 for third place Foothill Tech.

West Torrance High’s distance runners, who, last fall, keyed the Warriors boys’ cross country team to the CIF-State Division III championship, had strong performances and qualified for Saturday’s CIF-Southern Section Masters Championships. Rory Abberton took second in Division II in the 1,600-meter run in a school record time of 4:12.13 and Caleb Terrill was third in the 800 in 1:53.47. Both advanced to the Masters. 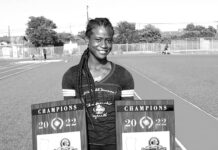 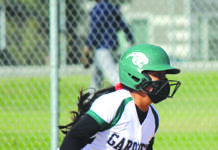 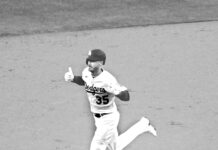