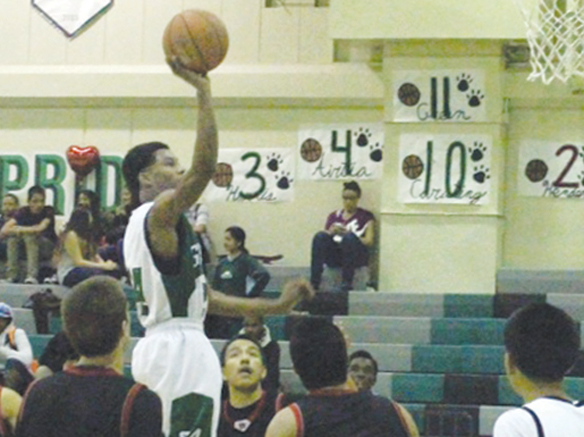 The Panthers entered last Friday’s Marine finale at home against Wilmington Banning with a winless 0-11 league record and a 13-game losing streak.

The Panthers entered last Friday’s Marine finale at home against Wilmington Banning with a winless 0-11 league record and a 13-game losing streak.

GHS, however, was able to overcome a 15-point early fourth quarter deficit and pull off a 73-60 overtime win over the Pilots to avoid a winless league record, although the Panthers still placed last in league.

The second half saw Banning start out with a 20-5 run for a 49-34 lead early in the final period, before the Panthers caught fire. A layup by Nathan Avita tied the game at 56 with 37 seconds left in the game and sent it into overtime.

The overtime period started with a three-point basket by Michael Thompson. That sparked the Panthers into scoring the period’s first nine points before the Pilots finally scored when Austin Morton followed up on his missed shot with 1:02 remaining.

GHS went on to build a 13-point lead behind a 10-for-10 free throw performance from Christian Carating in the final 56 seconds of the contest.

Carating led the Panthers with 25 points. Thompson chipped in 19 points and Kameron Loften put in eight.

Morton led all scorers with 26 points.

Gardena’s girls had a very cold shooting game in a 36-27 loss to Banning last Friday at Gardena.

The Lady Panthers were led by Mykahla Paschal with six points, followed by Erica Green with five.

Alexis Camarena tallied a game-high 10 points for the Pilots.

Their rewards are spots in the newly prestigious Open Division playoffs that start on Friday. Both are on the road as No. 11 seed Serra (20-7) visits Big VIII champion and fourth seed Corona Centennial (24-2) and Bishop Montgomery (22-4) is seeded 10th as it travels to No. 7 seed Chino Hills. The Knights and Cavaliers are ranked first and second, in order, in the Southern Section Division IVAA, while the Huskies are fourth in the Division IAA and Chino Hills is fifth in IAA, which is always a highly regarded division that includes seven teams in the 16-team bracket. Top seed is Santa Ana Mater Dei, the No. 1 team in the United States.

Bay League champion Redondo is seeded sixth and hosts No. 11 Compton, the second place team from the Moore League. The Tarbabes placed behind Long Beach Poly, which surprisingly did not make it since it did not quite reach the Southern Section criteria to qualify. Instead, the Jackrabbits enter the Division IAA playoffs as the top seed.

Corona Centennial, who Serra faces, already has a 67-60 win over Redondo in the Nike Extravaganza Challenge on Feb. 1 at Mater Dei. The Huskies are led by senior Long Beach State-bound Deontae North and Sedrick Barefield, one of the top junior point guards in the country.

At Serra on Feb. 12, Tavrion Dawson led the Cavaliers’ balanced scoring attack with 13 points, followed by Ron Freeman with 12.

Dawson led Serra with 30 points and 20 rebounds in its win over the Vikings. Kristopher Martin added 14 points and Lafayette Dorsey contributed 10 points and seven assists.

The Cavaliers were hot with a 17-game winning streak, ranked first in the CIF-Southern Section Division IVAA, and it included an easy 72-53 win over the host Knights on Jan. 28.

Bishop Montgomery, though, had other ideas. The Lady Knights stunned Serra, 57-48.

The Knights got things started fast in taking an early 12-4, behind three-point baskets from Tyler Quinn (two of them) and Christine Delapina.

Delapina scored seven of her game-high 14 points in the first quarter.

Also giving the Cavaliers fits was 6-foot-3 Ivy League school Cornell University-bound Janelle Odionu, who had 12 points and made several key rebounds and other defensive plays.

The Knights led 28-23 at halftime, but Bishop Montgomery pulled away, again, with a 10-1 second half starting run.

Caila Hailey did everything she could to keep Serra in the game as it came within nine points (42-33) on her layup early in the fourth period.

A three-pointer from Courtney Keaton, however, enabled Bishop Montgomery to have a 12-point lead and it kept the Cavaliers from coming back.

University of Southern California-bound Chyanne Butler led Serra with 13 points, followed by Hailey with 11. Nautica Morrow had 10 points off the bench.

Two days earlier at La Salle in Pasadena, the Cavaliers defeated the Lancers, 55-41.

The Cavaliers’ loss to the Knights, however, did not keep them from playing in the highly prestigious CIF-Southern Section Open Division playoffs.

Serra enters the 12-team tournament at home against No. 12 seed Mark Keppel High from Alhambra on Saturday at 7 p.m.

The Cavaliers are the only South Bay team competing in the Open Division; whose top seed (like the boys) is Santa Ana Mater Dei, ranked second in the nation.

Bishop Montgomery stays in Division IVAA, where it entered last week fourth in the division, and it is the No. 2 seed, behind Junipero Serra High from San Juan Capistrano. The Knights have a first round bye today and open at home in the second round on Saturday at 7 p.m. against either the Pioneer League’s at-large team El Segundo or Lancaster Paraclete.

After placing second behind Douglass in the Ocean League, the New Millennium boys’ basketball team enters the CIF-Los Angeles City Division V playoffs as the No. 3 seed.

The Warriors, who finished 11-12 overall and 8-2 in league, begin in the quarterfinals on Feb. 6 against the winner of Friday’s first round winner between Annenberg and Academia Avance next Wednesday at 7 p.m. at Gardena High. If New Millennium wins, it could visit Ocean champion and second seed Douglass on Feb. 28 at Dorsey High.

The championship is on March 8 at 10:45 a.m. at the Roybal Learning Center in Downtown L.A.

The Warriors closed league with a 62-46 home loss to Douglass last Thursday.

New Millennium’s girls also placed second in league behind Douglass and begin the City Division V playoffs as the No. 6 seed. The Lady Warriors host Marlton tonight at 7 p.m.