Elected as president was Gloria Gray, with Scott Houston as to serve as immediate past president and Carol Kwan as treasurer of the five-member board.

“I look forward to providing leadership to the West Basin board and I am honored to be elected by my colleagues to serve as the board president for 2020,” Gray said in a press statement. “As a board, we will continue to protect our existing water supply through our innovative water management and water-efficiency programs, while also securing local, drought-resilient resources for the communities we serve.”

Gray was first elected to the West Basin board of directors in 2006 and was re-elected in 2018. She represents the Division II city of Inglewood and unincorporated Los Angeles County areas of Lennox, South Ladera Heights, West Athens and Westmont.

She was also appointed to the Metropolitan Water District of Southern California (MWD) Board of Directors in 2009 to serve as one of two West Basin representatives. In 2018, she was elected chair of the MWD Board, where she is currently serving a two-year term.

Gray is the second woman and first person of color to serve as chair of the MWD Board.

Dear, who represents WBMWD District V, including the city of Gardena, was elected to the Board of Directors in November 2000. He is currently serving his fifth term after being re-elected in November 2016. Other cities he represents in Division V, are Hawthorne, Lawndale and the unincorporated Los Angeles County area of El Camino Village.

His experience in public service, serving on the Gardena City Council from 1970 to 1974 and again from 1978 to 1982, as well as serving as the Gardena mayor for nine consecutive terms from 1982 to 2001. He retired with 27 years of total service to the City of Gardena.

Currently, he serves as chair of the Ethics Committee.

Previously, Dear served as one of two West Basin representatives on the board of directors of the Metropolitan Water District of Southern California from 2013 to 2018

In 2004, 2008, 2012 and again in 2016, he was elected as one of the representatives for the Los Angeles County Independent Special Districts on the Local Agency Formation Commission of which he currently serves as First Vice President. In October 2011, the West Basin Board paid tribute to Dear’s distinguished public service by naming their Carson Headquarters the Donald L. Dear Building.

Dear has also distinguished himself through his work with youth, not only as a noteworthy educator, but also for his 30 years of unselfish dedication as a coach for more than 70 teams in three sports through the Gardena Recreation Department Youth Sports Leagues.

Kwan represents the Division III cities of Hermosa Beach, Lomita, Manhattan Beach, Redondo Beach and a portion of Torrance, will serve as treasurer.

West Basin’s board organization occurs annually at its January board meeting. The president of the board will facilitate the appointment of committees and assignment of representatives to affiliate organizations, and shall have the primary responsibility for interpreting the policies, programs and needs of the District to the public.

West Basin is governed by a five-member board of directors who are publicly elected to represent 17 cities throughout its 185-square mile service area in coastal Los Angeles County. 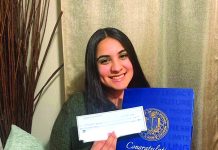