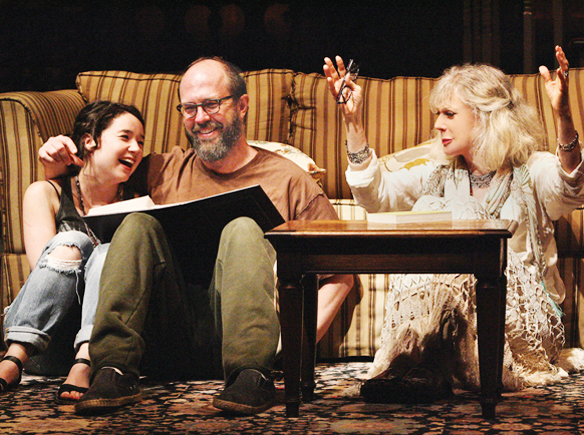 Pulitzer Prize winning playwright Donald Margulies has returned yet again to the Geffen Playhouse with his newest work, “The Country House.” His bittersweet comedy, inspired in tone by the pastoral comedies of Chekhov, takes place in a charming century-old house in Massachusetts owned by actress Anne Patterson (Blythe Danner). She has invited her family to join her there, along with fellow actor Michael Astor (Scott Foley , TV’s “Scandal”).

Pulitzer Prize winning playwright Donald Margulies has returned yet again to the Geffen Playhouse with his newest work, “The Country House.” His bittersweet comedy, inspired in tone by the pastoral comedies of Chekhov, takes place in a charming century-old house in Massachusetts owned by actress Anne Patterson (Blythe Danner). She has invited her family to join her there, along with fellow actor Michael Astor (Scott Foley , TV’s “Scandal”).

The reunion is to commemorate the memory of her late daughter, also an actress, who died one year earlier. During their brief summer stay in the country the family comes to terms with the roles they play in each other’s lives. Tony winner Daniel Sullivan directs.

Sarah Steele plays Susie Keegan, Anne’s granddaughter and Eric Lange is Elliot, her misfit son. Rounding out the fine cast is David Rasche as Walter Keegan, her son-in-law, a film director, formerly in the theater, who comes with his new lady friend Nell, played by Emily Swallow. Her arrival causes problems since she has a history with Elliot.

Eric Lange is particularly good as the hard to like (or love) Elliot who is constantly at odds with everyone, except his niece Susie who seems to understand her uncle far better than his mother Anne who is totally self-absorbed

She is still a beauty but her star power has faded and good parts are hard to find for older actresses, even those with considerable talent.

This world premiere production is often very funny, but underlying the humor is a touch of sadness as individuals come to grips with growing older, coping with loss and the need to be loved and understood.

“The Country House,” runs through Sunday July 13 at the Gil Cates Theater at the Geffen Playhouse, 10866 Le Conte Ave., Los Angeles. Tickets are available at the box office, via phone at 310-208-5454 or online at www.geffenplayhouse.com.

I must confess, when it comes to films about toys, my all time favorites are the "Toy Story" trilogy, three movies about the secret life of toys when no one is around to see them in action. Toys like Woody and Buzz Lightyear, the cowboy and space hero figures, captured my fantasy and heart, but then I am from a generation prior to the Lego phenomenon

Designed in Denmark, these little plastic building blocks can create cities and all sorts of stuff in the right hands. The purists follow the directions while others become like master builders who use the colorful plastic bits and pieces to make their own Lego universe. This concept is part of the plot in Warner Bros. "The Lego Movie," now available on DVD.

Warner Bros. producer Dan Lin and writer-directors Phil Lord and Chris Miller ("Cloudy With a Chance of Meatballs" and "21 Jump Street") were able to convince the Lego corporate heads to green light their movie, not an easy thing to do since the Danish corporation is very protective of the Lego image

The end result is a sweet, funny and gentle spoof that pokes fun at over-regulation and conformity. The film-makers also assembled a fine and varied voice cast. Lord Business/President Business and The Man Upstairs (Will Farrell) is the man who wants all things done according to plan. One of his employees, a yellow Lego construction worker named Emmet (Chris Pratt), follows a rigid routine and is happy doing so as he sings the film's theme song "Everything is Awesome," which is how my young neighbors Zane (10) and Gracie (8) described their movie experience

I am almost certain my nephew Michael and his son Steven felt the same way since both grew up mastering Lego building skills. In fact Steven, who couldn't read at the time, was able to construct a Lego castle by just looking at the diagrams. Quite a feat.

The ubiquitous Liam Neeson also has a prominent part in the film as the good cop/bad cop. With a spin of his yellow plastic head he can either be on your side–or not. There is also a secret weapon that can halt a Lego in its tracks known as Kragle which made me think of another movie starring Neeson who uttered the film's most memorable line–"Release the Krackon!"

What is Kragle? Well you'll find out when you and the kids see "The Lego Movie."

Morgan Freeman's Lego character Vitruvious looks like a blind biblical figure decked out in white plastic. He hands down a prophecy that a Special One will come and save the Master Builders who want to design a more fanciful place than the evil President Business will permit..

Things get complicated for the very simple, yellow fellow Emmet when he meets a cool motorcycle riding gal named Wyldstyle (Elizabeth Banks) who mistakes him for "The Special." He falls for her when she tosses her black plastic hair around which is funny since all the Lego folk move and act just like a stiff plastic actual Lego figure.

This movie wasn't my personal cup of tea, but if you are a Lego fan and know all about Lego construction you will love "The Lego Movie" to pieces…and there are millions and millions of bright colorful plastic pieces in this homage to a Lego world. Rated PG for mild action and rude humor.