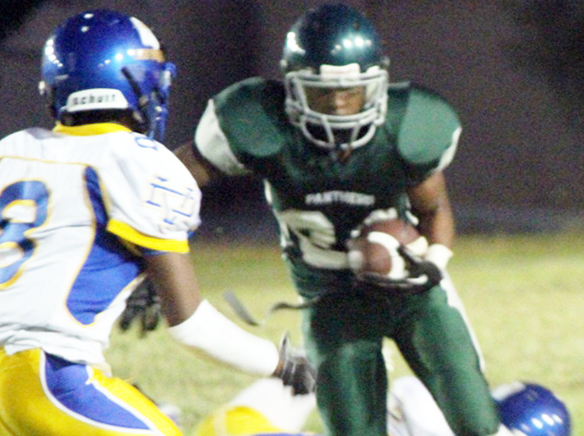 Gardena High’s standout Michael Thompson put on a show but Verbum Dei had too much depth in its 36-12 football season opening win over the host Panthers last Friday.

Thompson scored both Gardena touchdowns on each side. With 2:22 left before halftime, Thompson returned an interception 40 yards to cut the Eagles’ lead to 14-6.

After Verbum Dei took a 30-6 lead on a 3-yard run from running back Zachary Byrgle, Thompson returned a kickoff 90 yards for his second score early in the fourth quarter.

Gardena High’s standout Michael Thompson put on a show but Verbum Dei had too much depth in its 36-12 football season opening win over the host Panthers last Friday.

Thompson scored both Gardena touchdowns on each side. With 2:22 left before halftime, Thompson returned an interception 40 yards to cut the Eagles’ lead to 14-6.

After Verbum Dei took a 30-6 lead on a 3-yard run from running back Zachary Byrgle, Thompson returned a kickoff 90 yards for his second score early in the fourth quarter.

“Thompson did great but we need a lot more production from others,” Gardena head coach Vincent Smith said.

The Eagles were led by Davir Hamilton, who rushed for 153 yards and three touchdowns. Byrgle had Verbum Dei’s two other TDs.

Hamilton used his 6-foot-5 height, physicality and speed to dominate Gardena as he scored Verbum Dei’s three TDs on a 25-yard reception, along with runs of 11 and 13 yards.

“We knew about him,” Smith said of Hamilton. “He has great range.”

Gardena’s next game will be at Canoga Park Friday at 7 p.m.

“We got to get better,” Smith said.

Coming off a lackluster 24-6 season opening home win over Lakewood on Aug. 29, Serra High’s football team was heavily tested against Washington state power Bellevue in a battle of nationally ranked teams in the Honor Bowl last Saturday at Oceanside High.

Bellevue, which entered the contest ranked 13th in the United States by Maxpreps Xcellent 25, was known for its virtually unstoppable and ball control Delaware Wing T offense.

Sure enough, even the Cavaliers, who were 16th in the country, could not find a solution to it. The Wolverines had the ball most of the game and did not give Serra much of a chance as they won their 55th consecutive game over the Cavaliers, 31-14.

In all, Bellevue rushed for 346 yards and was able to chew up a lot of time in effort to keep the ball away from Serra as much as possible.

The Wolverines got things started early on a 5-yard touchdown run by Sam Richmond, his first of three.

The Cavaliers were able to drive to the Bellevue 13-yard line where sophomore kicker Erick Escamilla connected on a 30-yard field goal to cut then Wolverines’ lead to 7-3 with 2:49 left in the first quarter. A 39-yard pass from quarterback Caleb Wilson to wide receiver Tyron Johnson highlighted the drive.

Serra, again, made effort to take the lead midway in the second quarter but was stalled at the Bellevue 8-yard line where Escamilla converted on a 25-yard field goal.

After Bellevue added a 37-yard field goal for a 24-6 third quarter advantage, Serra finally got to the end zone on a 17-yard run from Job McGinty. A two-point conversion run from quarterback Khalil Tate got the Cavaliers deficit to 24-14 with 6:57 remaining in the game.

The Wolverines, however, put the game away on a 3-yard scoring run by Richmond with four minutes to go.

Despite the loss, Serra had all-American linebacker John Houston named as its game’s Most Valuable Player. Houston had several key tackles for the Cavaliers, who are 1-1.

Richmond was Bellevue’s MVP due to his three touchdowns. He ran for 72 yards. Isaiah Gilchrist led the Wolverines’ rushing with 91 yards.

Serra hopes to get back on the winning track as it visits CIF-Los Angeles City Section power Carson Friday at 7 p.m. The Colts are coming off a 41-7 rout of Fairfax last Friday.

Notch, who during last year was at University of Arizona on a baseball scholarship but bounced back to ECC to play baseball last spring, played his first season of football. He passed for 136 yards and one touchdown. Hernandez, who keyed the Saxons into the CIF-Southern Section Northwest Division final two years ago but was out with a lumbar spine fracture last season, threw for 138 yards and one TD. Those led the Warriors to a 37-20 win over host Pasadena City College in their season opener last Friday.

Notch had a fine game completing 13 of 21 passes with one interception. Hernandez was eight for 16.

The Warriors also had a fine game by Kendall Sparks as he rushed for 119 yards and one touchdown on 16 carries.

In a game that was mostly close, Notch completed an 18-yard TD pass to another ex-North standout, Devante Jenkins, to give ECC a 20-14 halftime lead.

Hernandez had a 9-yard scoring pass to Deon Williams.

Despite the season opening win, El Camino had first game jitters being penalized 20 times for 197 yards.

The rest of the schedule figures to be tough for the Warriors. Due to the recent demolition of Murdock Stadium and the new one being under construction, the Warriors will be playing all of their home games at Redondo High at 4 p.m. Their next contest is at Redondo against Ventura College.

All El Camino away games are at 6 p.m. except for Chaffey which will begin at 1 p.m.

Last season, the Warriors won four of their first five before losing four of their final five to fall to 5-5 and failing to make postseason for the second straight season. With a lot of potential talent, Featherstone looks to see El Camino return into contention.

USC gets big win; Bruins have another subpar victory: The University of Southern California proved it was for real with its second straight victory over host Stanford University, 13-10, last Saturday in Palo Alto.

The Trojans won the game on a 53-yard field goal by Andre Heidari, his career long, with 2:30 left in the game.

UCLA was able to get by lowly Memphis University, 42-35, but, for the second straight time, it wasn’t pretty.

The Bruins started the season ranked No. 7 in the NCAA poll but fell to 12th with another close win over a weaker opponent. USC, in fact, moved above UCLA in the rankings at ninth.

UCLA managed an outstanding defensive game in its 28-20 victory over host Virginia but, this time, it seemed asleep as Memphis scored on some big plays.

The Bruins also had some turnovers and defensive penalties leading to some Memphis touchdowns.

UCLA managed to have a strong performance from Heisman Trophy candidate Brett Hundley who passed for 396 yards and three TDs. He was intercepted once but it led to one of Memphis’ touchdowns.

The Bruins will really need to step things up as they visit University of Texas Saturday at 5 p.m. UCLA could be in for a very disappointing season if it doesn’t improve enough.

The Saxons, who struggled in preseason but came back to place second, behind CIF-Southern Section Northwest Division finalist El Segundo, in the Pioneer League, last season, improved to 2-0 with an impressive 34-19 victory over Peninsula last Friday at North.

The Warriors, who are the top ranked team in the Western Division, started with a bang in a 51-13 blowout over Culver City on Friday.

GVN Athlete of the Week, Dec. 4