The 3-year-old Gardena child who tragically died in a backyard pool on Nov. 18, has been identified by authorities as Royal Starks.

As reported in MSN.com, emergency services responded to a call that a male child had drowned in a pool on the 13100 block of Ruthelen Avenue.

According to MSN, “Officers arrived on the scene and began administering life-saving measures until the fire department arrived. The child was transported to Harbor-UCLA Medical Center where he succumbed to his injuries. No foul play is suspected and the case is being investigated as an accident.”

The Gardena PD released a statement on Nov. 18 which read: “On Nov. 18, 2022, the Gardena Police Department responded to an emergency call in the pool area of a single-family residence in the 13100 block of Ruthelen Avenue. The 9-1-1 caller reported that there was a 3-year-old male drowning victim at the location that was not breathing.”

“Multiple patrol officers responded to the scene and attempted life-saving measures until they were relieved by fire department personnel,” it continues. “The child was transported to Harbor-UCLA Medical Center [near Torrance], where, tragically, he succumbed to his injuries. Detectives responded to the scene. No foul play is suspected, and this case is currently being investigated as an accident.”

Gardena PD are asking that anyone with information contact Detective Jesse Ugalde at 310-217-9635.

The US Consumer Product Safety Commission reports that 390 deaths per year are caused by drowning in a pool or spa, as reported by MSN. It is the number one cause of unintentional death for children between the age of 1 and 4. 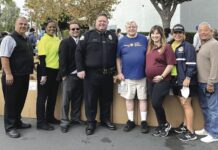 LETTER TO THE EDITOR: Game-saving ‘call’ not made