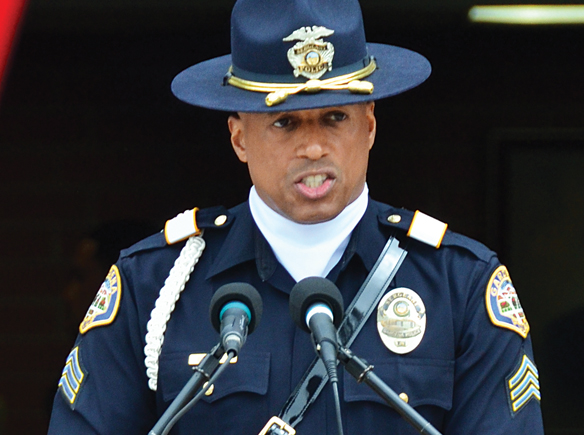 Gardena Police Department Sgt. Rodney Gonsalves sits at his desk, reviewing an application. Besides the required contact information, it contains a brief bio, as well as some grainy photographs that were taken a long ago, in a country half-a-world away.

He sifts through the paperwork and spots the most important piece of all, a DD-214. In layman’s terms, it’s the applicant’s Honorable Discharge from the U.S. military. This soldier has passed muster.

Gardena Police Department Sgt. Rodney Gonsalves sits at his desk, reviewing an application. Besides the required contact information, it contains a brief bio, as well as some grainy photographs that were taken a long ago, in a country half-a-world away.

He sifts through the paperwork and spots the most important piece of all, a DD-214. In layman’s terms, it’s the applicant’s Honorable Discharge from the U.S. military. This soldier has passed muster.

In short order, he will be one of the many that are spotlighted on the Gardena Honored Veterans website.

A 20-plus year veteran Marine Reservist, Gonsalves knows intimately about the sacrifice our men and women in uniform have made, and he wanted to do something to honor them.

“I was in Cerritos City Hall one day and I noticed (a monitor) that played a continual scroll of the city’s veterans,” he recalled. “I realized then that I wanted to have our city do something similar to honor our vets.”

Gonsalves turned to Tasha Cerda, Gardena mayor pro-tem, and a longtime community advocate. She readily agreed and jumped on board, taking up the position of group sponsor.

“I was completely in agreement with Rodney,” Cerda said. “I knew that we needed to do more than just honor our veterans once a year on Veterans Day.”

The two pushed the idea up the chain of command, and received a very positive response from the city council, and from Mayor Paul Tanaka. They even received permission to link the veteran’s website to the official city site.

With the green light given, the website was created, and an application for non-profit status was submitted. With those two items out of the way, a board was formed and the brainstorming began.

The first order of business was to establish the framework of the organization, how it would work, and who would be eligible to be honored. Not wanting to exclude anyone, they decided to let anyone, who either lived or worked in the city, to be included, so long as they had an honorable discharge.

They also agreed that there should be absolutely no cost to be honored on the site, and they will accept no money from veterans who are honored.

This restriction on accepting funds from veterans hasn’t stopped others from lining up and wanting to donate.

“Since we are still waiting on approval of our 501-3C application, we can’t accept any money from these businesses and groups that want to contribute,” Cerda explained. “ But we have had a great response from our business community and monies are already earmarked. We just need to get our approval.”

Waiting on the approval to be established as a non-profit has put the group in the posture of being in “soft” launch mode. As soon as they are approved, they plan on a very big grand launch.

The councilwoman said, “We plan on having all of our sponsors, members of the American Legion and VFW, city dignitaries…and of course, our honored veterans.”

The website also does more than simply honoring our veterans; it serves as a portal for important veteran’s services and information. There are links to veterans counseling services, and to the Redondo Beach Boulevard Veterans Center. The site even lists where to get veteran’s discounts at local businesses, or how to replace lost medals.

Long term, the group hopes to build a memorial at the civic center, or to have display flags similar to those in other cities such as Torrance. For now though, they are working hard at getting the word out to all veterans to make them aware of the site. They even had an on-site sign-up center at the Nov. 11 Veteran’s Day celebration at City Hall.

Watch for our veterans to be honored here in future GVN issues.