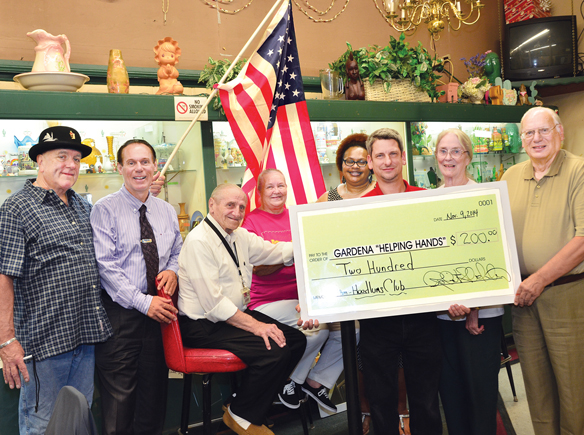 Several individual contributions rolled in during a quiet week of Helping Hands activity.

Giving $100 contributions each were, “In Memory of Paul and Terry Greco,” Edith and Kenneth Shimokochi, June Eicker, and ER Thompson.

Several individual contributions rolled in during a quiet week of Helping Hands activity.

Giving $100 contributions each were, “In Memory of Paul and Terry Greco,” Edith and Kenneth Shimokochi, June Eicker, and ER Thompson.

Alton and LaVerne Knight gave $100 this past week. LaVerne is a Gardena businesswoman and Wall of Fame inductee.

A $100 donation was given by Tom Parks, retired executive director of the Gardena Valley Chamber of Commerce. Parks is also a former GVN columnist, author of the “Gardena Ramblings.”

Donating to the food pantry was Boy Scout Troop 948 of Torrance. Scout members show up Sunday to deliver 521 items of canned and non-perishables.

Exalted Ruler Alyssa Santos of BPOE 1919 made the check presentation Oct. 1 to the Helping Hands coordinator, Evette Wedlow-Benjamin, at the Gardena Elks Lodge. In attendance for the presentation were Elks members.

The Elks gift to the holiday Helping Hands drive was generated through its very successful bingo program. The Hands money will go toward grocery food vouchers.

Giving $200 each was Evelyn B. Nall in Memory of Norma Nall, and the Hoodlums Club, Inc.

A word from director Evette Wedlow-Benjamin:

More than 2,360 individuals living in Gardena, many of them children and seniors will not be able to enjoy the holidays without the food, gifts and toys that many of us take for granted.

Helping Hands, which is a combined effort of the Elks Lodge 1919, Lions and many other service groups and churches in the City of Gardena, is now entering its 33rd year of community service, will make the holidays a bit more comfortable for those who are low income or unemployed.

You can assist with Helping Hands with food, new unwrapped toys or monetary donations by dropping them off or mailing them to:

Drop off or send donations to:

For a great cause

Now in its 33rd year, Gardena’s holiday food drive will benefit more than 400 needy families in the community, and will serve more than 1,700 people with grocery vouchers and gifts for the kids.

Sponsored by the city of Gardena in cooperation with the Gardena Valley News, the holiday food drive began in 1981 as a food basket giveaway to Gardena’s less fortunate.

In recent years, food vouchers to area grocery stores have replaced food baskets, which provides families with a greater selection of food items, including dietary and ethnic items.

Every year, Helping Hands receives palettes of canned foods from various groups for the holiday.

The city of Gardena provides all staffing in the Hands drive and all monetary contributions go toward the holiday fund-raiser and the year-round food pantry. No money is used for administrative costs.

As in the past, the Gardena Valley News will publish a list of contributors, with a weekly update of new donors. 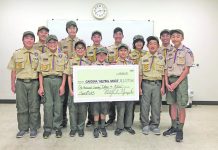 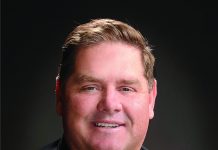 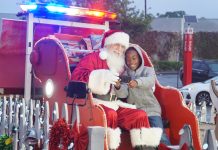