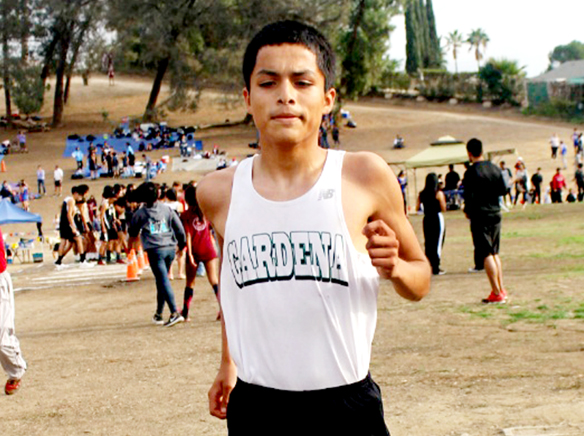 Macias and the Gardena squad won their heat at the Division II Prelims on Nov. 13, but managed just a sixth place finish as Manual Arts, which tied with the Panthers in the prelims with 72 place points each but Gardena won with its sixth runner finishing better than the Toilers’ sixth finisher, ended up winning the title with 60 place points to 83 for second place Panorama.

He was second in scoring with the L.A. High team failing to qualify for the finals. All three advance to Saturday’s California State Championships at Woodward Park in Fresno, beginning at 8 a.m.

Rebuilding Serra looks to improve as season goes on

Serra could be hard press with a mostly young and inexperienced squad this year, but Hurt feels that it can improve to become a strong contender again.

The Cavaliers return just two players but one was all-CIF Southern Section in 6-foot-2 senior guard-forward Jason Richardson. The other is 6-foot-7 junior forward Ian Carter.

“We’re mostly young,” Hurt said. “We’ll jell and do whatever we have to do to have a great season. There will be a lot of teaching and it will be very receptive.”

The Cavaliers will be tested in playing in the always prestigious Redondo Pacific Shores Tournament, which began last Monday when Serra took on Santa Monica, which will be one of the favorites to win the Ocean League.

The Cavaliers begin the Del Rey at home against Playa del Rey St. Bernard on Jan. 21. Bishop Montgomery, led by Stephen Thompson, Jr., appears to be the league favorite. Serra hosts the Knights on Jan. 28 and visits Bishop Montgomery in their league finale on Feb. 11.

El Camino fell behind early, 2-0, before Edgar Esquivel scored on a cross from Branddon Cando shortly before the end of the first half.

Unfortunately, the Warriors were unable to get any further scoring as they were eliminated from the playoffs after enjoying one of their best regular seasons in recent years. ECC won the South Coast Conference.

Harbor College’s men’s soccer team was also ousted in the first round of the Southern California playoffs to host Chaffey College 4-1 last Saturday in Rancho Cucamonga.

The Seahawks ended their season at 6-7-9.

The Panthers will play in the Mira Costa Pacific Shores Tournament against Brentwood next Wednesday at 4:30 p.m. That classic runs through Dec. 6.

Gardena begins the Marine League at Banning in Wilmington on Dec. 15 at 4 p.m.

Against the usually high scoring Coyotes, the Warriors (12-0 and top seed in the division) fell behind 21-7 in the second quarter before turning things around, especially in the second half despite playing without standout running back Brett Ojiyi who was injured.

West had a strong game by Michael Timmerman who rushed for 95 yards and one touchdown on 15 carries.

Quarterback Trevor Mallett had a 52-yard keeper for a TD. Dale Rouse caught three passes for 84 yards and one touchdown, and had two scoring runs.

The Warriors stepped up on defense. Nathan Lima had a partial blocked punt and two quarterback sacks. Benton Shortridge recovered a fumble to stop a Calabasas drive in the third quarter that helped West shut out the Coyotes in that period.

The Warriors will face Palos Verdes at a site to be determined on Friday at 7:30 p.m. The Sea Kings are the home team. The winner will play for the championship on Dec. 5 or 6 at the same time.

The Colt defense was able to shut down the Cougars, who were the defending City Division I champions, with three interceptions, one of those a key one from Manuopuava Tui-Enesi that led to Carson putting the game away on a 30-yard touchdown run by Devonte King with 1:21 left in the game.

He also ran in the two-point conversion.

Keying Carson’s offense was Minix who rushed for 73 yards and one touchdown, and added three pass receptions for 74 yards.

The win put the Colts into the semifinals at top seed San Pedro Friday at 7 p.m. At San Pedro last Friday, the Pirates rolled over Arleta 42-13.

Narbonne moves to semis: Number-three seeded Narbonne High’s football team moved into the CIF-L.A. City Section semifinals with a 22-6 quarterfinal victory over Dorsey in the quarterfinals last Friday at Narbonne.

The Dons scored first but the Gauchos dominated the rest of the game scoring the final 22 points.

Quarterback Roman Ale sparked Narbonne with two big runs and scored the Gauchos’ first touchdown on a 1-yard run that gave Narbonne (8-4) a 7-6 lead with 8:49 left in the second quarter.

Ale also added another TD in the third period and Narbonne put the game away in the fourth quarter.

Damion Gatlin ran for 160 yards for the Gauchos.

GVN Athlete of the Week, May 14